“All Ohio saison brewed exclusively with barley from Jeff & Sherri Gochnauer from Smithville, OH and hops from Jeff and Shari Bailey from Auburn OH.”

This one might have had a bit of Belgian stank to it, but not much. Tasted like a regular beer, with a little bit of light fruit floating around in there. Not especially impressive. 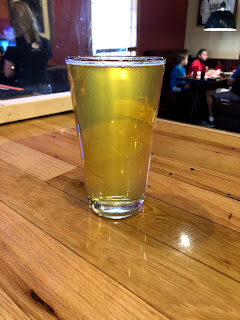 Posted by John Peddie at 7:19 PM No comments:

“Collaboration IPA with Alematic out of Dayton, Ohio. Strawberry and Lemonade on the front end with lactose added for a light and creamy finish.”

I’ll give you the lemonade, but not the strawberry—and definitely not the “light and creamy finish.” It had the hazy look of a milkshake IPA, but it was very citrus forward (I tasted oranges), and pretty tart. I thought it was a really good beer, but I’m not sure that the description matched what I was tasting. 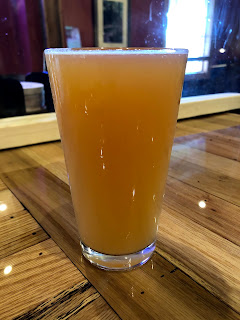 Posted by John Peddie at 7:03 PM No comments:

“Brewed with espresso beans. Dark and Rich with delicious coffee and chocolate overtones.”

This was on tap at a winery in Lancaster, Ohio, but I can’t find it on the Wolf's Ridge website, and the closest thing the interwebs can give me is a couple of milk stouts (Night Method and Into the Night). I get strong coffee on the nose and a bitter finish that smooths out as it warms up. There might be chocolate malt in the brew, but the flavor is not overt. 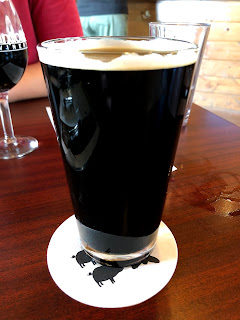 Posted by John Peddie at 6:34 PM No comments:

“Your taste buds are in for a flavor eruption with Wild Ohio Blueberry Tea Beer. We combined the flavor of juicy, succulent blueberries with small hints of lavender, and we instantly knew we had did [sic] ourselves a winner! At 6.5% ABV, Blueberry is a great, year-round drink that is popular among Wild Ohio fans.”

The blueberry flavor is sweet, and very strong, but not exactly off-putting. I thought I could taste the lavender, but if the word had not been in the description, I would never have guessed. The finish is smooth and crisp—not even a little bit dry. 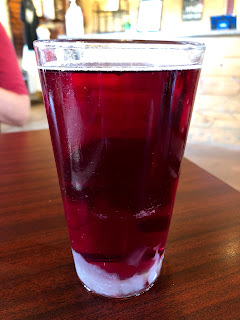 Posted by John Peddie at 6:06 PM No comments:

This was the beer I bought for carry-out when we visited Brewery 33 on Sunday. Unfortunately, the first one I tried was mostly flat. Oddly, though, that did not seem to affect the flavor. Very Cascade-y, with grapefruit, spice, and citrus, and a slightly bitter finish. There are three more waiting, so hopefully at least one of those will be a little bit better. The second one was also flat, and tasted mostly the same as the first one. The third one, at home, and poured into a mug, was not quite as flat and had a much smoother flavor, with very prevalent spice notes. Not sure how I feel about this place, though the tiny little taproom had a very friendly vibe. 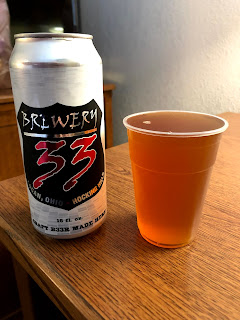 Posted by John Peddie at 5:48 PM No comments:

“Egg nog taste with hints of nutmeg and lactose for a creamy & sweet flavor.”

The egg nog flavor is so slight that if you did not already know it was there, you might not guess. The nutmeg flavor is slightly more prevalent, but both are very light; and it has a very dry finish that lingers awhile. This is one of those odd beers that I really liked and thought was really well done—but which I’m not sure I ever need to drink again. 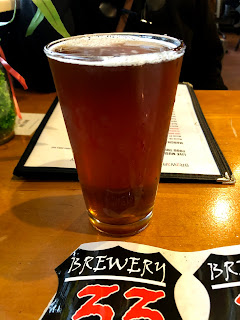 Posted by John Peddie at 5:10 PM No comments:

“1802 Lager is a light and crisp American lager at 4% ABV. No rice. No corn. No international conglomerate. 112 calories per 12oz serving.”

On the off chance that you might have confused this with a Clydesdale-beer-that-shall-not-be-named. (And on the further off chance that you come to craft beer looking for something with a low ABV.) The chalkboard at the garden said this one was 5.4%, but when the numbers are that low, I can’t really tell. Slightly more interesting than the porter, but only because it has the slightly sweet taste of a lager and the crisp backbone of a pilsner. Perfectly fine, but not something I think I want to pay craft beer prices to drink. 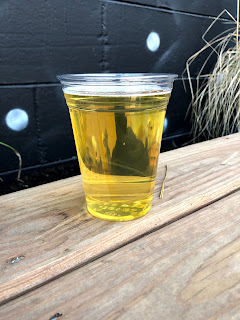 Posted by John Peddie at 5:47 PM No comments:

“A malty Robust Porter with a strong roast character.”

No description from Black Acre, so had to cadge this one from Untappd. There’s nothing bad about this one, but there’s nothing really interesting, either. I would not have used the word robust, but that’s just me. Amy and I went over to the Black Acre Garden this afternoon, and this was one of only two things on tap that I had not tried. I also still don’t have a lot of experience with porters, so it’s possible that this beer is really good and that I just find it disappointing because it’s not as interesting as most of the other things that Black Acre has been doing. 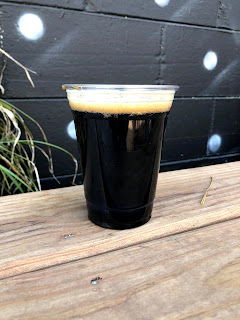 Posted by John Peddie at 5:45 PM No comments:

I signed up for the roni jab, and the website asked why I wanted the vaccine. I wrote, “Common Sense?” Are you fucking kidding me? Die, Joe.
Posted by John Peddie at 7:06 PM No comments:

Sweet pineapple flavor up front, balanced out very nicely by the high alcohol (7.7%) and the clean, dry finish. This is the kind of beer I want to drink during a violent thunderstorm or when Republicans are winning elections and I think the world is going to end. 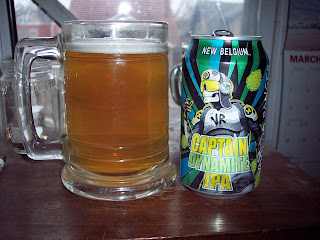 Posted by John Peddie at 6:43 PM No comments:

And I’ve had even fewer Kölsches (sp?), so I really don’t know what to make of this one. It was quite bitter, which seems to be something of a trademark with Scarlet Lane. Nothing else really stood out; it was clean and fresh, and might have had just a hint of fresh-cut grass or unripe lemons, but anything else that might have been present was crushed and melted by the bitterness. 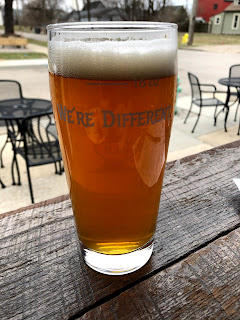 Posted by John Peddie at 4:54 PM No comments:

I haven’t had a lot of oatmeal beers, but the ones I can recall have all been pleasant surprises. This one isn’t as interesting as its coconut variant, but that soft caramel finish is very nice. This and its variant are the two best things I have tried from Scarlet Lane, so it looks like stouts may be the way to go at Cannonball from now on. 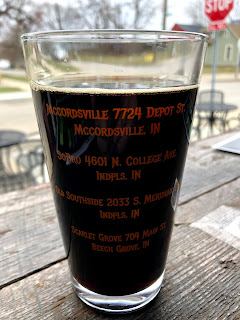 Posted by John Peddie at 4:42 PM No comments:

“Churrolicious is a Sun King/18th Street collaboration Pastry Stout made with actual churros in celebration of the inaugural Indiana Statewide Stout day.”

And so my inside source at Sun King says that these kinds of things are generally 50/50 and that the collab distinction is something like a marketing ploy. (Actually, he didn’t say that. I made it up. You don’t know who I am, and you don’t know who he is, either. We never spoke.) It is clear upon sipping this bad boy that I have not consumed many churros in my life. I suspect it’s possible I have had more pastry stouts than churros, so I probably shouldn’t even be talking about this. But I just discovered what a great album Led Zeppelin’s Presence is, so I’m sort of in that place where I feel like I’m at least marginally qualified to talk about anything. (And even though am not be an expert, I feel pretty confident that I am smarter than the average bear when it comes to both beer and Led Zeppelin.) Motor oil you should have changed six months ago isn’t as dark as this shit. There’s a nice roasty flavor to balance the sweetness, along with the faint taste of graham crackers—and as it warms up, I get sort of a hint of root beer. (That can’t possibly be right, can it?) Overall, it’s a little bit heavy for me, both in terms of flavor and strength (8.0%), but I’m glad I got the chance to try it. 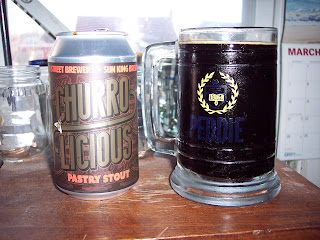 Posted by John Peddie at 3:38 PM No comments:

It took a crossword clue to bring this home, but why the fuck do we have to live in a world in which Renée Zellweger has two fucking Oscars?
Posted by John Peddie at 5:42 PM No comments:

“Take a step outside onto the patio and take a breath of fresh air. Then crack open this Pilsner Style Lager because the best day deserves the best beer.”

You will not be surprised to discover that I do not spend a lot of time with pilsners. I’ll buy a case of Miller Lite in a pinch, if I happen to be at a liquor store outside the beltway and they don’t have PBR; but that’s about it. However, I have been enjoying the offerings from 18th Street since Amy and I tried it for lunch back in November, and this is one of the styles you can sometimes get in their case deal. I tried a four-pack with my most recent case deal, and they aren’t half bad. There’s a sort of floral/citrus flavor up front and a dry, hoppy finish; and could that maybe be fresh-cut grass in there, too? I generally don’t think of pilsners as nearly this complex, but this was a pleasant surprise—and it’s a nice low-ABV (4.9%) option from 18th Street, where even the session IPAs crest around 6%. 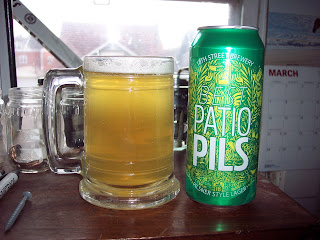 Posted by John Peddie at 5:26 PM No comments: