“The 13th DDH IPA in our Craft Brew Doodle Crew series, this hazy IPA was brewed with Callista and Cascade hops, with a final round of Barbe Rouge hop addition near the end of the fermentation.”

Oh Indiana City…how much do I love thee? This is an excellent milkshake IPA, super hazy and a little bit sweet, with nice tropical and stone fruit notes and a moderate alcohol (7.5%) that sneaks up on you. And then some citrus when it warms up a bit. Get thee to a nunnery! 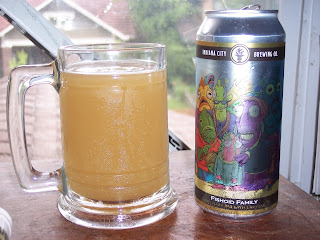 Posted by John Peddie at 6:14 PM No comments:

“Clocking in at 15-20% ABV, 120 Minute IPA is continuously hopped with a copious amount of high-alpha American hops throughout the boil and whirlpool, and then dry-hopped with another pallet of hops. Unfiltered and abundantly hoppy, it’s the Holy Grail for hopheads!”

I never would have noticed this if Shane hadn’t blogged about it. I drank this one by itself, and I suppose it was nice to try; but the super-high alcohol (15-20%) gives it a syrupy feel and lands it in hybrid territory, an unincorporated community between beer and liqueur. I suppose those are hops I’m tasting, but if you dropped an Alka-Seltzer in a glass of brandy, I’m not sure I could tell that apart from this. Which possibly makes me uncultured, but so be it. Didn’t enjoy this one so much as I finished it because I could not quite bear the thought of pouring a $10 beer down the drain. 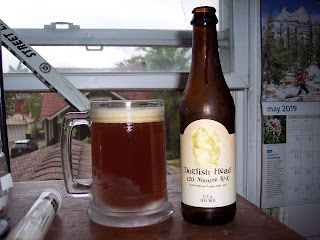 Posted by John Peddie at 7:55 PM No comments:

More light and refreshing than intense, I think. Certainly not bad, but not exciting, either. 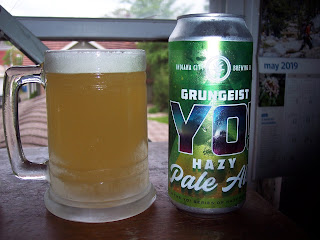 Posted by John Peddie at 7:47 PM No comments:

“This is a juicy IPA with mango. We helped make America a little more juicy with our Make America Juicy Again, but some “juiceheads” just can’t get enough. So now we’re making things even more juicy. We’ve upped our game by adding delicious mango and a bit of creamy lactose. This beer is full of juicy hops and juicy tropical fruit. And it could be so juicy, it is juicier than thou.”

The lactose smooths things out and really lets the fruit come through. Refreshing and dry, but not bitter, with some nice citrus on the back end. Loved it. 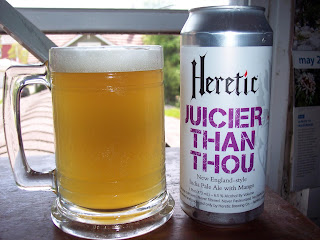 Posted by John Peddie at 2:37 PM No comments:

I am recently returned from a short trip to Big Sur, California, where we attended a memorial celebration for my late uncle. It was a very California send-off for a very California kind of guy who left us far too soon and will be deeply missed. In fact, it was so California a celebration that we illegally scattered his ashes at a beach that could potentially have contained nude bathers. And—of course—there was beer.

“This aggressively hopped West Coast IPA showcases stunning pineapple, citrus and piney aromas along with exceptional dry hop flavors of grapefruit and tangerine. This intense brew finds its balance in honey-like pale malt sweetness. The name Union Jack is a nod to the colonial origins of the IPA style, and to the British expatriate who co-founded our brewery.”

According to the website, there are nine different kinds of hops in this beer. I got more of a tropical flavor than citrus or pine. Had two of these at the restaurant inside the Big Sur Lodge, so could not investigate further; but if I see this one out in the wild here in flyover country, I’m all over it. (I believe I may have mixed my tenses there.)

“Named for the delicate engravings popularized by 19th century seafarers, Scrimshaw is a fresh tasting Pilsner brewed in the finest European tradition using Munich malt and Hallertauer and Tettnang hops. Scrimshaw has a subtle hop character, a crisp, clean palate, and a dry finish.”

Drank this one at the Nepenthe restaurant between the illegal scattering of the ashes at Pfeiffer Beach and the memorial fête at the Henry Miller Memorial Library. It was not bad, but not especially memorable.

“No fruits. No flavorings. No shortcuts. Just the magic of 100 percent natural hops, expertly blended to offer mindbending flavors with each numbered release.”

Yeah, but I didn’t know about the numbered release thing until just now when I looked it up for the blog entry, so I don’t know which one of these I had at Nepenthe. I did like it, though. I tasted tropical notes that made me think it was hopped with Citra. According to the website, I should have been drinking Luponic Distortion 012, with “explosive flavors of tangerine, honeydew and strawberry gummy.” I do not recall tasting any of those.

“Anchor Steam© Beer owes its deep amber color, thick, creamy head, and rich distinctive flavor to a historic brewing process like none other.”

Okay. And to show just how thoroughly uncultured I am when it comes to this stuff: to me, this is basically just beer. If someone offers me one of these, I take it and drink it happily. It’s beer. Do I go looking for it when I’m out buying beer? No.

“Brewers’ Pale Ale is an evolving hop series, yet it remains a crisp and quaffable American Pale Ale packed with hop aroma and flavor.”

I really used to prefer bottled beer to canned beer, but no longer. This one was really good, especially while girding my loins to read some remarks about my uncle that my mom had written. I have never done public speaking well, but I think I pulled it off. I don’t give all the credit to this Citra brew, but I suppose that I am not too proud to acknowledge that it might have helped. Would love to run across it in cans or on tap somewhere.
Posted by John Peddie at 8:19 PM No comments:

This is one of the regular house beers at Black Circle, one of their best, and this might be the best batch yet. I’ve seen the word dank used to describe beer quite a bit, but I’ve never understood it. It’s possible that I do now. Very strong pine flavor, but not at all bitter. Both smooth and sharp at the same time. I can’t say enough good things about Black Circle, and if you haven’t been, then run—don’t walk. Great Cuban food out of the Elena Ruz kitchen, classic movies on VHS, more metal shows than you can shake a stick at, and absolutely, positively, the best craft beer we have going for us in Indianapolis right now—hoppy pales, flavorful stouts and porters, and all kinds of beautiful goses. Get thee to a nunnery! Or, you know, something. 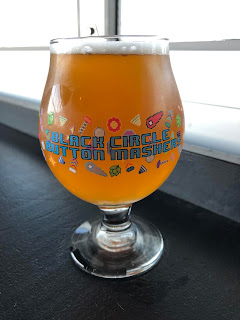 Posted by John Peddie at 4:13 PM No comments:

I’ve never posted a Black Circle beer because I have never been able to take a picture of one while I was there drinking it. But hell seems to have frozen over, and I am now able to take pictures of beers out in the wild. No description of this one since they don’t put descriptions on the website and there’s no can, but this is a Berliner Weiss that they asked me if I wanted to add a syrup to. I declined, thinking that syrup and beer probably shouldn’t mix. It’s very light and refreshing, and very low alcohol (4.3%) for a Black Circle joint. A little bit sour up front, but clean and crisp on the back end. Could I drink this all day? Probably. 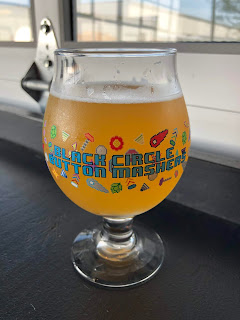 Posted by John Peddie at 3:56 PM No comments:

“Triple the fruit, tripel the flavor. With an intensely flavorful trifecta of raspberry, ginger and citrus, this limited variant of our Belgian-style tripel will be your go-to refreshment this spring. Bright and tart berry notes, zesty lemon peel and ginger spiciness will leave your taste buds in full bloom.”

I feel like I should be more impressed with this beer than I am. The raspberry and ginger play well with each other, and the high alcohol (8.5%) makes it nice and romantic, but…I don’t know. It just didn’t do it for me. 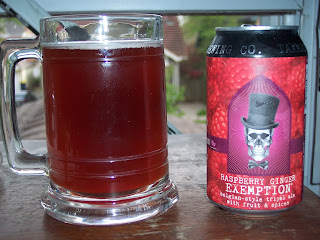 Posted by John Peddie at 3:53 PM No comments:

“Brimming with citrus aromas from Galaxy and Citra hops, this moderately sweet and hazy IPA is devilishy juicy.”

To me, the high alcohol (7.7%) masks the juicy profile a little bit—and drives a pretty bitter finish; but the citrus up front is nice. As it warms up, I get some of the peach flavor, but that finish gets more bitter, too. 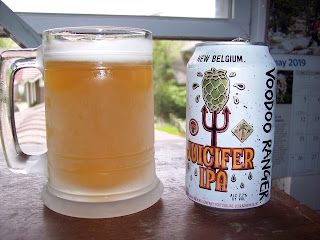 Posted by John Peddie at 2:46 PM No comments:

“This single hop pale ale showcases the Citra hop for a well-balanced beer that is delicate in body with a mild bitterness in the finish. She roars with ferocious aromas of grapefruit, citrus, mango and evergreen. Pseudo Sue’s unique taste is clean and bright with just enough bite!”

Very bright and refreshing, with nice lingering notes of citrus zest and an aromatic whiff of pine. 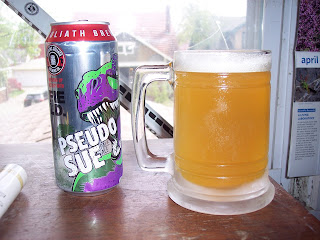 Posted by John Peddie at 1:48 PM No comments: