“This sharp looking beer is brewed to be as dry and hop-forward as possible. From the effervescent carbonation to the low residual sugar, this beer is designed to showcase the copious amounts of Hallertauer Blanc & Mosaic hops used to produce it.”

Bright and crisp up front, with very light melon and stone fruit flavors. Unusually big (8.0%) for something so smooth and refreshing. I don’t get the pleasant funky taste I usually get from Central State, but I can’t tell whether that’s on purpose or not. They’re using a different yeast here, which might not contain the Brettanomyces yeast they usually employ. Either way, it’s a great beer. 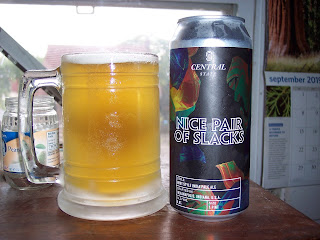 Posted by John Peddie at 1:15 PM No comments:

“This batch, Lil’ Wiz, is a triple dry hopped American Pale Ale. Simcoe, Citra, and Eureka hops are just a few of the hop varieties that make up the layers of flavor that provide a unique depth to this bier. A clean, clear, and traditional style American Pale Ale.”

I was expecting something a little more intense from a brew billed as “triple dry hopped.” Nice Citra up front, and dry, piney goodness on the back end. Not bad, just nothing to write home about. I have yet to find the offering from Bier that makes me sit up and take notice. 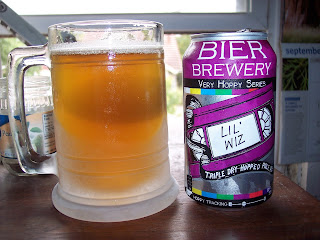 Posted by John Peddie at 7:38 PM No comments:

It’s almost hard to believe this blathering monkey is the same guy who projected the calm voice of reason after “some people did something.”
Posted by John Peddie at 10:59 AM No comments:

“The next installment in our Craft Brew Doodle Crew series, Gojira Siren Clash is a Double Dry-Hopped IPA clocking in at 7.5% ABV. This beautifully hazy beer was brewed with Idaho Gem, Dr. Rudi, Mosaic and Eureka hops.”

Like many of the beers in this series, Gojira Siren Clash starts off with a creamy, low-carbonated mouthfeel that screams milkshake. Then it moves into a sort of turf war between fruit and pine, with a slightly bitter finish that benefits from the balance imbued by the lactose. 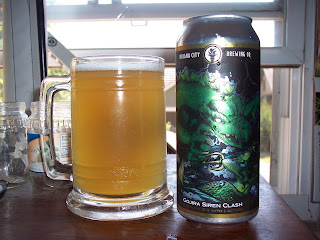 Posted by John Peddie at 2:56 PM No comments:

“This IPA is created with the same attention to detail as the beautiful mosaics that graced the walls of prominent buildings in the city of Pompeii. It features mango and pineapple hop flavors with a medium-body feel to tantalize the senses.”

Mango and pineapple are subtler than citrus and stone fruit, at least to me. They are, however, tropical; and tropical was the first word that came to mind when I tasted this beer. So, nice tropical notes up front, leading quickly to a sharp—but not bitter—hop finish. Surprisingly refreshing for a relatively big (6.2%), flavorful beer. For some reason, I only wrote one sentence about Pseudo Sue, the other Toppling Goliath brew I’ve tried; but I remember liking it. And I really like Pompeii. 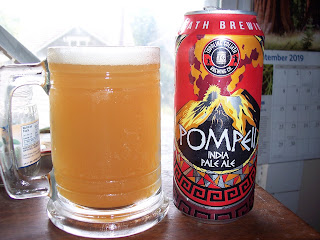 Posted by John Peddie at 1:46 PM No comments:

“A Colorado IPA with crisp, juicy, and resinous hops and a rich, malty finish.”

Very bright citrus up front, and a very bitter finish. Might be a little too crisp to be juicy, and I don’t know about you, but resinous makes me think of pine; and I don’t get any pine here at all. However, I want to do my due diligence, so I’ll have another one, and see if the flavors change at all after the mug has warmed up. Nope…still no pine. Very drinkable, though.

(Note: I just read a book about Goose Island selling out to AB InBev, and most of me wants to avoid the craft- and micro-breweries that sell themselves to Big Beer; but I also get that it’s a complex issue, and the market is too (ahem) fluid to be 100% up-to-date at all times. I’m sure as hell not going to do any research while I’m standing in the beer aisle, or in front of an open cooler. So I may, from time to time, wind up drinking and blogging about a beer that is no longer, technically, “craft beer,” since I was not aware of its assimilation at the time of purchase. But I will look into it while drinking the first one, and if they have been absorbed by Big Beer, I will avoid them in future.) 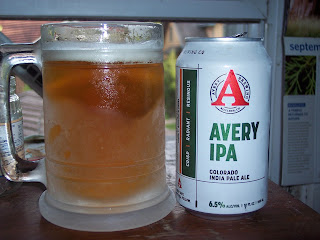 Posted by John Peddie at 7:54 PM No comments:

“Duality is our newest DIPA, brewed with a combination of Amarillo, Centennial, and Loral hops in hefty boil and dry-hop additions! Expect a bitter beer, with minimal alcoholic warmth.”

Yes, they do in fact describe the beer (at least on Untappd, because at the moment their current lineup feed isn’t populating on their website) as having minimal alcoholic warmth, despite the fact that it clocks in at 8.3%. And I would call it dry, rather than bittter; but let us not pick at nits. This is a very balanced beer, with strong orange notes and lots of malt, which gives it an almost—almost—sweet back end that opens up very nicely as it warms. Way too boozy to drink more than one or two of, but the flavor profile is excelllent. Would that there were a session version… 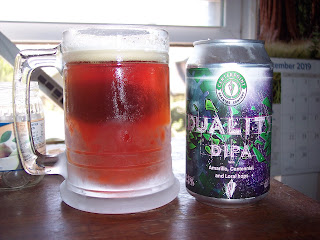 Posted by John Peddie at 2:51 PM No comments: