I just found out that Amy and I have tickets to attend a taping of the Late Show with David Letterman next Tuesday while we are in New York!
Posted by John Peddie at 6:01 PM No comments:

Grantland: The Most Hated College Basketball Players of the Last 30 Years

I wasn’t actually aware that there was anything better than filling out tournament brackets in March, but it turns out that filling out bonus brackets in March before the real brackets come out is pretty good, too. At least, the idea of it is pretty good. I came across this story while perusing CollegeBasketballTalk at the old juke joint the other night. I’ve written on more than one occasion about not buying into that rivalry crap about hating your rival’s school just because they’re your rival, and about not disliking a player for no other reason than that he plays for a school that competes in a rivalry with your own school (or with whichever you school you happen to root for).

It’s funny what the NCAAs can do to you, though. It’s difficult to explain, but the bad feeling I get when Indiana loses in the NCAA tournament is always much stronger than the good feeling I get when they win. This is due in part to a couple of tough breaks in the 1990s, when Indiana lost to Duke in the Final Four in 1992 and to Kansas in the Elite Eight in 1993. If not for that infamous Christian Laettner shot, Indiana would have played Kentucky in the Final Four, and not Duke. I think Indiana would have beaten that Kentucky team, but that’s just me. In 1993, Alan Henderson’s knee exploded toward the end of the Big Ten season, and that might well have been the difference between losing to Kansas in the regional final and hanging a sixth national championship banner in the Assembly Hall. (For what it’s worth, that 1993 team only lost four games all season—to Kentucky and and Kansas in the pre-league, and then at Ohio State, deep in the Big Ten season. And yes, that does mean that 50% of Indiana’s losses that year came at the hands of Kansas.)

I never really got over disliking either Duke or Kansas, and for no other reason than that they beat Indiana in a couple of key games twenty years ago. It should have been enough to get me over when Indiana beat #1-seeded Duke in the Sweet Sixteen in 2002, but apparently not. I still smile a little on the inside whenever Duke loses a game. It doesn’t help matters that Duke is as consistently good as they are. (Which is not remotely mitigated by the fact that current Duke head coach Mike Krzyzewski made his bones as an assistant to one Bob Knight, at Army, way back in the day.) I never cared about Kansas as much as I cared about Duke back then, and I no longer care if Kansas wins or loses. I was even rooting for them last year, because I picked them to win the national championship, and I was the only one in the ESPN Tournament Challenge group I participated in who had Kansas as the champion. I was way down in the standings by the time the Final Four rolled around, because three out of my four Final Four were gone—but the way the points worked out, I would have finished with the highest score in our group if Kansas had beaten Kentucky. Sometimes that’s all it comes down to—which horse you have in the race, so to speak.

And so while I don’t really hate any college basketball program or player, there are certain programs and players that I...like less than others, I guess. It’s the middle of March, so it’s almost time for the NCAA tournament, which means college basketball is on my mind a lot—and because Indiana has been very good at times this year, I have been worried about the minor swoon they took during their last four games in the Big Ten regular season. That’s what made finding the Grantland bracket of most hated college basketball players of the last 30 years so amusing—it’s a good way to ease some of that pressure, and to remind myself that it’s just a game. It would have been amusing regardless of how the brackets had been structured, but what makes it extra fun is that one region—fully one fourth of the bracket—is devoted entirely to players from Duke. The author of the post goes on to explain why the Dukies had to be relegated to their own region, and he also gives a pretty concise explanation for why people seem to dislike Duke so much—and what that boils down to is the fact that they win as much as they do.

At the end of the day, sports should be about sportsmanship and teamwork and having fun; and it’s important to remember that these are just games. I’m definitely going to keep that in mind as I fill out my Most Hated College Basketball Player of the Last 30 Years bracket at the same time that I’m filling out my real bracket for this year’s tournament. (And watch—Duke is going to win the tournament this year, because of the reverse karma that comes down on the head of the guy who came up with this idea. Of course, because I blogged about it, Duke is going to beat Indiana on their way to that national championship.)
Posted by John Peddie at 12:09 AM No comments: 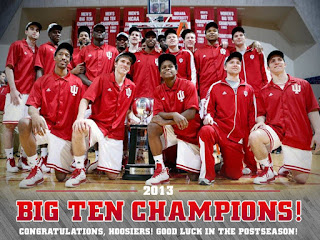 Posted by John Peddie at 8:17 AM No comments: