We were driving back from Bloomington this afternoon, going north on Shadeland Avenue, when the old General Cinema Eastgate stomping grounds came into view. For over forty years, the relatively small building in the southeast corner of the Eastgate Consumer Mall property has been clearly visible going in both directions on both Shadeland Avenue and Washington Street.

It opened in 1974 as a 2-screen theatre, and then four more screens were grafted onto the building twelve or thirteen years later. When it re-opened as a 6-screen theatre in 1986 or 1987, it was one of the premiere movie theatres in Indianapolis. That lasted for all of about seven years, until the enormous new Clearwater Crossing 12 opened in 1993. Eastgate soldiered on for another ten years, enduring the encroachment of Kerasotes Theatres and the assimilation of General Cinema by Another Major Competitor, before the latter shuttered it in early 2004. (Kerasotes was also eventually assimilated by Another Major Competitor.)

Today, the theatre building was torn down. This was what I saw when we passed it on our way back from Bloomington.


After we got home, I drove back to the theatre with my camera. IMPD has used the old mall space as an operations center and east district headquarters for several years now, and they built a perimeter around most of the area, restricting public access. I hadn't driven by in years, so I didn't know that the perimeter doesn't quite extend to the theatre property. I was able to drive up to what would have been the front curb, had the exterior not already been destroyed. One of the guys on the demolition crew gave me leave to stay and take pictures, so I did. 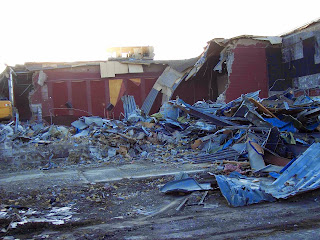 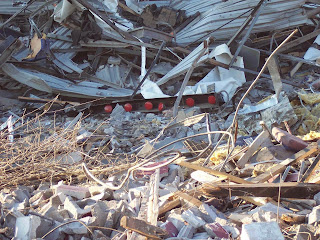 I'm going to try to go back tomorrow to see if I can get some more shots. I took these pictures at around 7:15pm, so I can't imagine that they would have finished the job today. They certainly will not have carted all the debris away, so I'm sure I'll get some kind of pictures tomorrow - assuming I can still get this close.
Posted by John Peddie at 11:59 PM No comments:

Walking along the Cultural Trail today, in front of the IRT, I’m pretty sure I heard someone refer to it as the Indiana Respiratory Theatre.
Posted by John Peddie at 7:58 PM No comments:

Would you believe that someone who stated, for the public record, that church attendance should be mandatory, was a Republican from Arizona?
Posted by John Peddie at 7:56 PM No comments:

When lead is pronounced with a short-E, it’s a heavy metal - not the past tense of the verb describing what a leader does. That word is led.
Posted by John Peddie at 12:52 AM No comments: 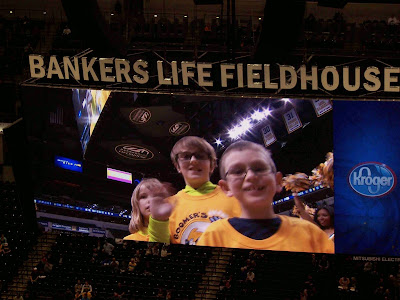 Beginning Our Fifth Month of Winter

According to the National Weather Service, Saturday night's winter storm set an Indianapolis record for snowfall on March 1st, and eclipsed the average monthly snowfall total for March by 5am.

#Indy surpassed the average March snowfall in the first 5 hrs of the month. March avg 2.6", we've seen 3.1" since 12AM. #INwx #snowdoinwork 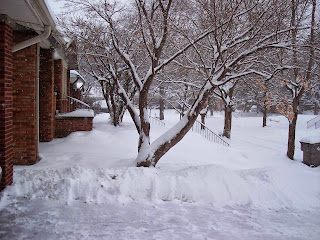 And while this winter has not been as bad as the one in Boston, where they have had more than double the amount of snowfall we had last winter (which set a record here), we did manage to record the third coldest February on record; and I believe they said we recorded the seventh coldest November on record. November is not part of astronomical or meteorological winter, but we had snow on Halloween, and it was so cold that we had to cut trick-or-treating short.

Jackson had fun with it, though: 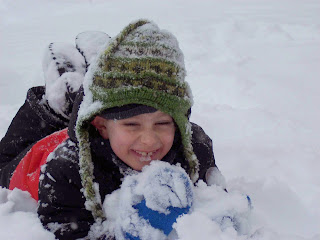 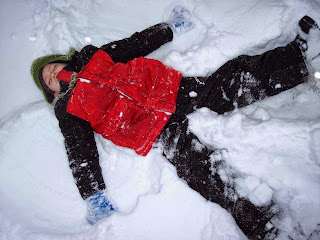 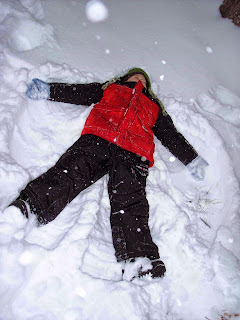 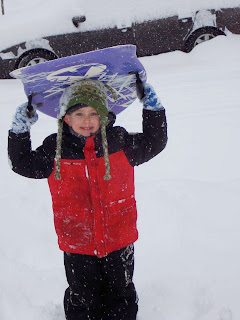 I can't stand being cooped up in the house all day, but no one wanted to go for a walk with me, so I had to strike out on my own after we took care of shoveling the driveway and sidewalk and front steps. What's cool about taking a walk on a day like this is that you get to see things from a different perspective. I went downtown, parked near the canal, got a cup of coffee at Mo'Joe, and then hit the Canal Walk. Normally this is a heavily populated multi-use path for walkers, joggers, bikers, skaters - you name it. (It's also part of the Cultural Trail, so it always gets plowed after fresh snow.) But today it was deserted, and a little bit eerie - but that was kind of cool, because you never see it that way.

It's been so cold this month that some parts of the canal have frozen solid, which allowed some enterprising architect(s) to create this: 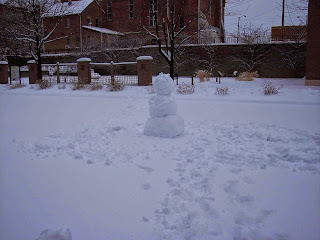 And last but not least, you never see the mastodonts at the State Museum covered in snow, either. 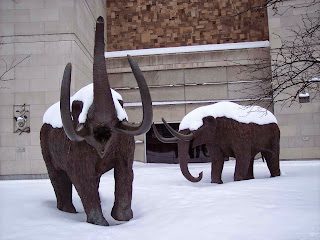 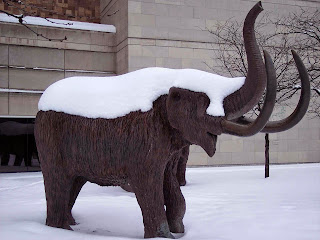