Oh boy. The bourbon and cider echoes from the barrel are very strong, but the clean, crisp sour flavor is almost—almost—enough to make me feel like I could chug this fucker like a Mountain Dew. (And on a better day I might have done; but Sunday was a slightly off day during which we went hiking at Turkey Run for an hour and a half before we ate the sandwiches we had brought along from Shapiro’s, and moderately strenuous hiking on an empty stomach is not a good idea.) I don’t get much of the Brett funkiness, but between the sour profile and the barrel flavors, I guess I’m not surprised. This will never be packaged, which is a shame—because I would like to have a few more of them to study. 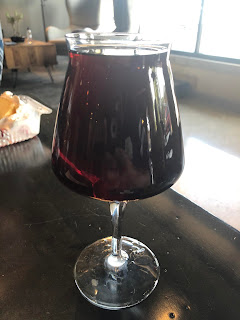 Posted by John Peddie at 6:18 PM No comments:

“A light, refreshing and completely unique wheat beer. This brew has a delicate aroma and a subtle taste of white chocolate.”

Fifth of five from Shane, and for some reason, they distinguish between the main PHX Brew Co. and the Sonoran Brew Co. on the website. This is the only beer in the Sonoran section, and I haven’t the foggiest what distinguishes one company from the other. The description above comes from the website, but the description on the can reads (in part), “Are you #@%&!, this tastes just like white chocolate, but its [sic] not. Or is it?” That one is probably closer to accurate; there is nothing subtle about the white chocolate flavor here. (And that ain’t remotely a bad thing—in case you were wondering where I stood on it.) It’s a white chocolate bomb, and it’s bizarre and interesting—and also my first Arizona beer, which brings me to 25 states since I started this safari. 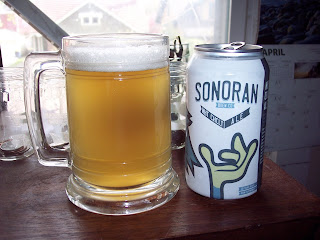 Posted by John Peddie at 5:50 PM No comments:

“An American Pale Ale brewed with Zeus hops from our fields. These hops are carefully guarded by Zeus the Toad, the great and powerful protector of our fields. He greeted us as we planted the first Zeus hops.”

The fourth of five, and the first one that is not impressive—not bad, just not impressive. It’s got sort of a spicy thing going on, and maybe a hint of pine in there, too. 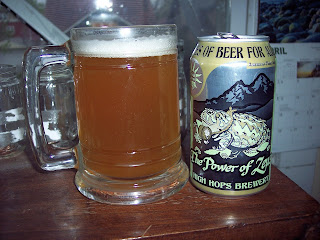 Posted by John Peddie at 6:54 PM No comments:

“This IPA features a soft mouthfeel, hint of bitterness, & a burst of fruity aromas from Mosaic & Amarillo hops.”

Third of five from Shane, with a smooth and slightly sweet taste of melon up front that begins to taste like banana as it lingers. Almost all fruit, with a barely-there dry finish. Thus far, these are some very impressive beers. 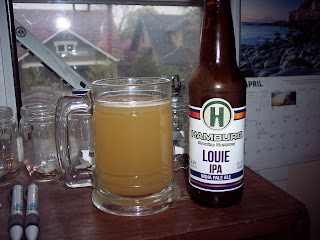 Posted by John Peddie at 5:22 PM No comments:

“Challenger hops, Pilsner malt, and our house yeast strain are the headliners in this easy Pale. The result is agile, alluringly herbal, and supremely refreshing. The dry hop really makes this one sing.”

Here we have the second of five that Shane shared with me, and this one is all kinds of interesting. In one sip I taste lots of different flavors, from grass to pine to citrus; and in the next sip, I taste almost no flavor at all—just a refreshingly light mash-up of Pilsner and pale ale. It’s got a nice, dry finish that might be a little bit bitter at first, but smooths out as it warms up. 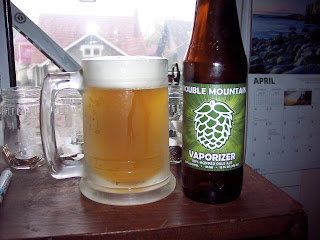 Posted by John Peddie at 5:07 PM No comments:

“A New Mexican IPA that boasts orange zest and fresh pine aromas. A pale malt base gives way to a long pine and citrus finish. Always chasing that orange-pine balance, hops may vary.”

My buddy Shane very generously gifted me a handful of beers from his beers-of-the-month club that he was gifted this past Christmas, and this is the first of five that I will get to try. Two of them, including this one, are from states whose beers I have not yet tried on this odyssey—which will bring me to a total of 25 states. I think they have achieved the balance they boast about in the description, but the moderate alcohol (7%) feels a little bit out of place. A session version of this beer would be absolutely spectacular on a hot summer day when it’s time to mow the lawn. 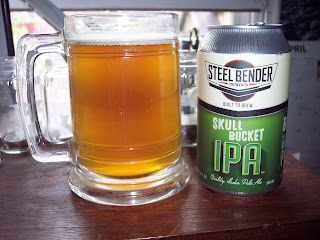 Posted by John Peddie at 6:10 PM No comments:

Stop reporting about Donald Trump. Michigan, Pennsylvania, and Wisconsin corrected the treason they committed in 2016. You’re fired, Donald.
Posted by John Peddie at 5:58 PM No comments:

Labels: 140 Characters, Why This Country Sucks

“To celebrate our 30th Anniversary, we brewed a special, hop-forward tribute to our beloved Fat Tire. Dry-hopped with Mosaic, Galaxy, Idaho 7 and Sabro, Wild Ride has a decidedly American-style aroma that rolls right over malty-sweet and fruity amber characteristics. It’s a perfect reflection of the last 30 years—totally recognizable, a little unexpected, and easy to love. What a wild ride it’s been.”

Tastes pretty light for 7%, with some nice stone fruit and citrus up front, and a little bit of pine resin on the drier back end. Feels less aggressive and more straightforward than the Voodoo Ranger series. 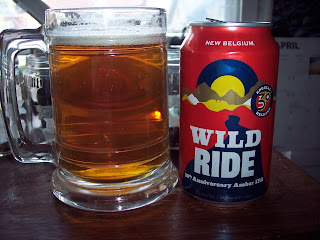 Posted by John Peddie at 2:04 PM No comments:

“Inspired by the North Coast’s dedicated (and sometimes chilly) surf community, our fully stoked Double IPA will melt the ice in your beard and never lose its balance.”

Um. Okay. It is nicely balanced, though the high alcohol (9%) is apparent. I don’t get a real specific flavor profile, but there is something rich and sweet going on that makes me think of papaya. It sort of takes me back to Honduras two years ago, where we had the chance to eat fresh papaya that we literally picked off of the trees. It’s far too big, though—if this were a regular IPA, it would be excellent. I think. It’s sweet enough that if it were smaller, it might be cloying. 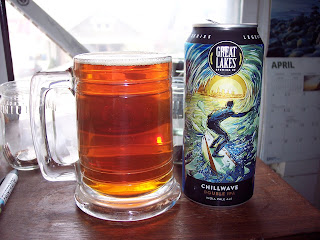 Posted by John Peddie at 4:43 PM No comments:

Too much going on here, and none of it really stands out—apart from that trademark Scarlet Lane bitter finish. After rather liking the previous one, I’m back to being unimpressed. 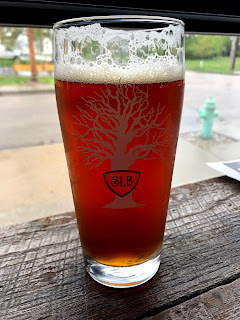 Posted by John Peddie at 4:25 PM No comments:

Because of course Eilise Lane would brew an official beer for this kind of event. And…it turns out to be one of the better offerings I have tried from Scarlet Lane. It has a very light grapefruit flavor and is not as strongly bitter as their usual IPAs. It’s also surprisingly small for an IPA, at only 5% ABV. 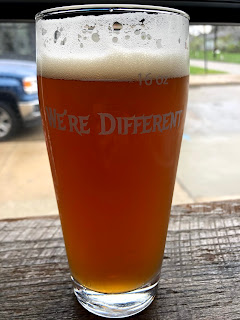 Posted by John Peddie at 4:09 PM No comments:

So St. Elmo was allowed to re-open just in time for the national title game on Monday. I’m sure that basketball was no consideration at all.
Posted by John Peddie at 2:18 PM No comments:

All kinds of nice tropical and citrus things are going on here, along with a small initial burst of pine in the first sip. The timing of our trip to southeastern Ohio was not conducive to visiting Athens and its many breweries and wineries, but I managed to find a six-pack of this at a local grocery store; and it was one of the better beers I tried while we were out there. 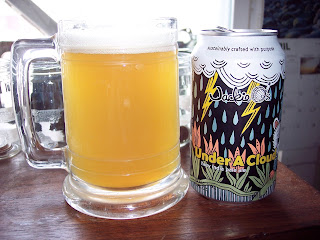 Posted by John Peddie at 2:59 PM No comments:

Know who I want to have standing next to me when the shit hits the fan and the fists start to fly? Sasha Stone. Want to know why? Read this.
Posted by John Peddie at 11:18 AM No comments:

No description that I am able to find, apart from “DIPA” on the online menu. Stone fruit and pineapple up front, and mostly alcohol on the back end. Some citrus emerges as it warms up, and it’s not bad—but it’s a little heavy. 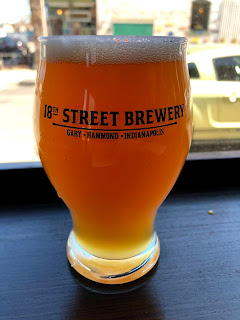 Posted by John Peddie at 7:06 PM No comments:

This was on tap at the 18th Street taproom this afternoon, and I just assumed that it was one of their beers; but when I looked it up for a description, I discovered that The Sour Note brewing is…um…separate?…from 18th Street? Sort of? Best I could find was a little blurb on Untappd that describes it as a “gypsy style brewing project of the 18th Street Brewery.” Either way, it was a fine beer. Light pomegranate taste and moderate sourness, and relatively big for a gose at 6.6%. Refreshing change of pace for an 18th Street joint. 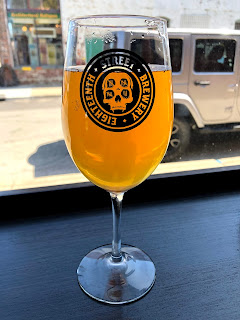 Posted by John Peddie at 5:55 PM No comments:

Take your travel restrictions, stick them as far up your ass as you can get them, and then go back to East Germany where you fucking belong.
Posted by John Peddie at 12:59 PM No comments: