“Using Amarillo and Simcoe hops, with added Blood Orange fruit, gives this IPA a sweet and refreshing flavor with a touch of bitterness.”

The touch of bitterness is definitely there, and it’s too pronounced for something on the low end of the alcohol scale (5.2%). The orange flavor is bright and refreshing up front, but that bitter finish gives it something of an identity crisis. I want to put three or four of these in a bucket with ice and go mow the grass, but the bitterness makes me want to sit in a smoky bar and talk about poetry.

Not to be deterred, however, I decided to go out on the porch and try one in the fucking summer soup, along with a Red Apple. Because when your wife is in fucking Myanmar and your kid is spending the weekend at his friend’s house, you can go out on the porch for a Red Apple whenever you fucking want. It’s still pretty bitter on the back end, but about halfway through the second one, I didn’t care as much. And my wife is still in fucking Myanmar. 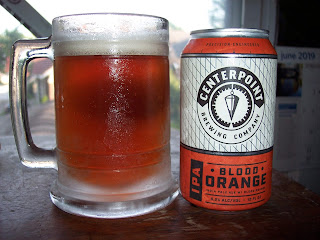 Posted by John Peddie at 8:29 PM No comments:

“Reap the benefits of being fully vested with Peach Tangerine Golden Parachute. This robust golden ale, fermented with Brettanomyces, required months of aging in barrels in order to develop striking funky aromas of grape must and berries, balanced by the sweet tang of tangerine and peach. One sip and you’ll feel rich.”

Pleasantly funky and fruity, with a nice, dry, Brett finish. Tastes stronger to me than the 6.2% ABV they advertise, which sharpens it up a little bit. Naturally, I feel as though I should try a second one, to see if my doubts hold up. Alas, they do. Still sour, funky, and sharp, in ways that I usually find pleasant, but here do not. 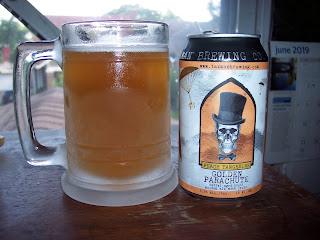 Posted by John Peddie at 8:37 PM No comments:

LaVar Ball definitely behaves like the most ridiculous human being alive; but in a world that contains Mitch McConnell, he ain’t even close.
Posted by John Peddie at 1:18 PM No comments:

“A bold yet balanced American Pale Ale with slight caramel sweetness and aggressive citrus hoppiness. This is our flagship beer.”

I used to be completely against drinking beer out of a can, preferring draft or bottles; but canning technology has changed since the mid-90s, and Sun King came along ten years ago and embraced that technology. I took a tour of the Sun King facility downtown, a year or so ago, and one of the things I learned that stuck with me is that hoppy beer—and that’s the vast majority of craft beers these days—degrades at an alarming rate if it’s bottled and not kept cold. It’s to the point now that I won’t even look at pale ales in bottles unless they’re in the cooler at the liquor store. (And that means no bottled pale ales from the grocery store, because Indiana.)

3 Floyds has always distributed their beer in bottles, and since that Sun King tour, that has been one of the main reasons I haven’t tried much from 3 Floyds (other than that six-pack of Zombie Dust, back when Zombie Dust was hard to come by). But as Bob Dylan sings, things have changed. 3 Floyds is now distributing some of their mainline beers in cans, including this flagship American Pale Ale, Alpha King, in tallboys.

I don’t remember what I thought of it when I had it in a bottle, but out of a can, this beer is a lovely experience. The caramel sweetness is more aggressive up front than the citrus hoppiness, but there’s a smooth citrus flavor on the back end. This becomes more pronounced as it warms up. I also get sort of a floral hit there at the end. This is a nice beer to linger over, and it sort of makes me remember the old days at Nicky Blaine’s, when it was located in the basement of the King Cole building, before it moved across the street to the basement of the Guaranty Building and took on a hip-hop-geisha motif that almost entirely betrays the Rat Pack stylings of the original concept. 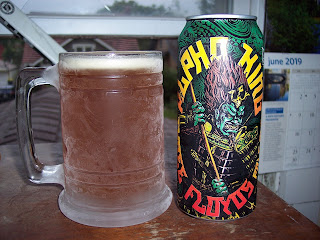 Posted by John Peddie at 8:46 PM No comments:

“Highway Queen is a Sour Ale aged over French oak with raspberries, cherries, and zinfandel grapes. The beer is part of our tenth anniversary collaboration four pack—10-4 Good Buddy—and was brewed with our friends at Cigar City.”

Nice and fruity, with a crisp tannin finish, but not aggressively sour. The sourness mellows out when it warms up a bit, and that fruity flavor becomes nice, ripe, rich fruit. Probably the most interesting of this Sun King anniversary four-pack. 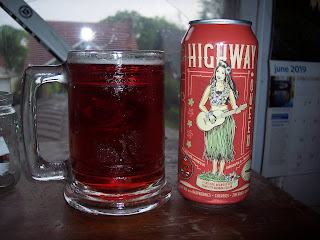 Posted by John Peddie at 7:38 PM No comments:

“Maximum Overdrive is a Baltic Porter made with an international mix of hops, malts, and yeasts. The beer is part of our tenth anniversary collaboration four-pack—10-4 Good Buddy—and was brewed with our friends at 3 Floyds.”

I’m not big on porters, but this one isn’t heavy or offensive. Nice and crisp, with a dry, but not bitter, finish. It gets a little heavier when it warms up, but still not bad. 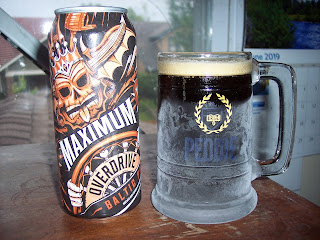 Posted by John Peddie at 9:41 PM No comments:

“Collabergé is an Imperial Brut IPA with a full managerie (sic) of hop flavor and a dry finish. The beer is part of our tenth anniversary collaboration four pack—10-4 Good Buddy—and was brewed with our friends at Austin Beerworks.”

Very dry finish, but a nice, almost sweet tropical flavor up front. A little too big (8.5%) and bitter to be refreshing, but lovely to come home after a 16,000-step day at the old juke joint. 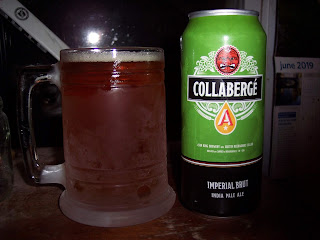 When a frat boy working for the Colts calls with advertising I know the home office won’t buy, that makes we want to not root for the Colts.
Posted by John Peddie at 8:55 PM No comments:

Labels: 140 Characters, Why This Country Sucks

“Hoppiness Jones is an IPA aged in both Pinot Noir and Tequila barrels with hibiscus. The beer is part of our tenth anniversary collaboration four pack—10-4 Good Buddy—and was brewed with our friends at Rhinegeist.”

The wine and the tequila play nicely off of each other up front, but it’s very bitter on the back end. It’s an interesting mix of flavors, but that lingering bitterness keeps it sitting in the interesting section, trying to see around the beers in front of it in the enjoyable section. 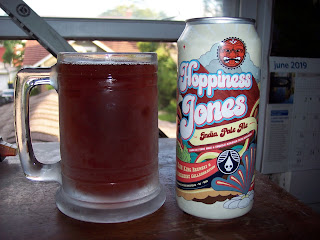 Posted by John Peddie at 8:10 PM No comments:

“Take a Deduction, our abbey-style dubbel. This effervescent ale showcases malty sweetness with rich notes of raisin and fig. Although dark in color, this approachable dubbel features a light and dry body, accented by caramelized candi sugar.”

Raisins and figs are two more fruits I’ve never encountered in beer descriptions, and “candi sugar” calls to mind the sort of bimbo that Dan Fielding might hook up with one night after court. Not really my thing, but the dry finish helps to mitigate the off-putting upfront sweetness. I was afraid I might have trouble choking one of these down after I had the first sip, but it was surprisingly smooth; the glass was empty was sooner than I thought it would be. 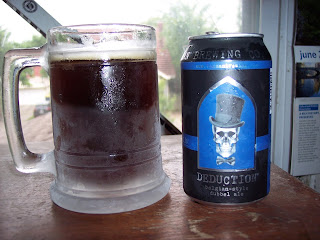 Posted by John Peddie at 4:51 PM No comments:

“Salva Vida is an American-type lager with a crisp, refreshing and balanced taste—not too sweet, not too bitter—that can be enjoyed by everyone.”

I didn’t do any kind of research into beer while we were in Honduras at the end of March, but I did find out that hanging out at the local Texaco gas station is sort of a hip thing to do, in a little town called Catacamas. Inside the Texaco is a sort of restaurant where you can get chicken wings, pizza, and sandwiches. You can also get cold beer out of the cooler—but you can’t drink it inside the Texaco station, or in the “dining room” at the back. You have to go outside. You can drink wine inside, which my wife and a couple of other people did. Those of us drinking beer had to go outside and sit on a picnic table. And while that was sort of punk ass, I did wind up thinking that it was kind of cool that I was chilling with some people and drinking a beer in Honduras.

Salva Vida lager seems to be the default “national” beer of Honduras. It is an unassuming caramelly lager that is crisp and smooth and goes down pretty easily. Not as good as the Gallo beer I had in Guatemala—but then again, nothing about the trip to Honduras was as good as the two trips we took to Guatemala. This is certainly not the best of the 100 beers I have so far blogged about, but it’s definitely a unique one for the 100th post. 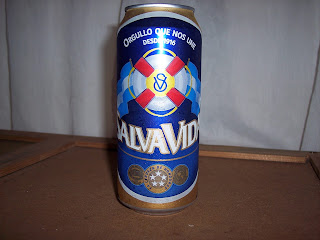 Posted by John Peddie at 8:16 PM No comments:

A little bit fruity, and a little bit funky. Crisp and refreshing, and not at all bitter. 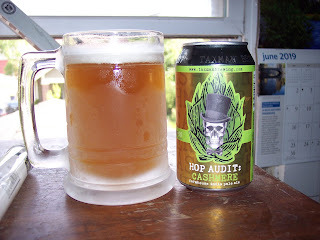 Posted by John Peddie at 7:49 PM No comments: