A Pilgrimage to See A Moose

When I was 9, we took a three-week family vacation by car - and when I say "by car," what I really mean is in a mid-1970s Buick LeSabre - to California, mostly to visit my uncle in San Francisco, but also so my parents could take me and my brother to Disneyland. They're not big Disney people, and we were never the kind of family who went out and did things only because other families were doing those same things and we wanted to fit in; but there was some kind of bugaboo buried somewhere in their collective psyche that told them they should probably take us to one of the Disney parks at least once while we were kids, just to have done it, so we would know what it was like, how much less satisfying it is than roughly any other amusement park anywhere on (Spaceship, natch) Earth. (Okay, I threw that last part in. They felt like it was something they should do as parents. I thought it was unsatisfying, at least in terms of the rides.)

And yes, we drove. Not because getting there is half the fun, as Clark W. Griswold would have said, but probably because it would have been much more expensive to fly. We camped overnight, in a Coleman pop-up camper, in places like Gothenburg, Nebraska; somewhere in Wyoming; and Winnemucca, Nevada, before arriving in San Francisco and staying with my uncle, who would have been 30 or 31 at the time. Being a tech person, he had a number of fancy gadgets in his apartment, and one of them was a laserdisc player. Remember laserdiscs? Same technology as a CD, but the size of a vinyl record album, and they played movies. So what did my MIT-educated uncle elect to play on laserdisc for his impressionable 7- and 9-year-old nephews?

And we, much to my mother's chagrin, devoured it. We watched it over and over again, and we aped the lines; and for whatever reason, the pimp-daddy's reply to Clark's request for help getting back on the interstate, "Hey, fuck yo mama!", was the one we latched onto and aped the most. I have since maintained a deep and abiding love for that film, and the whole point of this digression is that, because of all of the fond memories I have wrapped up in the concept of National Lampoon's Vacation, I have come to think of any trip to California, from some place far enough afield as the Griswolds would have traveled in the film (Chicago, in point of fact - which is close enough to Indianapolis for government work), as a trip to Walley World.

We have recently returned from just such a trip.

We did not go to Disneyland. Amy took Jackson to Florida to visit her grandfather last year during spring break, and while they were there, they went to Disney World. That might just get me off the hook for Disney parks. Our trip this year was for the purpose of seeing friends and family, and visiting national parks. We started in Sacramento, ended in San Bernardino, visited five relatives and one of Amy's friends from college, and made it to four national parks - Yosemite, Sequoia, Kings Canyon, and Joshua Tree (and collected what I am roughly estimating as around a gajillion dead bugs on the front end of the car I rented when we landed in Sacramento).

I wanted to include more than one picture in this post, but - surprise! - it took me way longer to write the post than I had imagined it would. So for now there is only one picture. However, we have about a thousand pictures to go through, and I have a lot more to ramble on about, so there will be more posts about the trip. And more pictures. (No, really. There will be. Pictures of Jackson, too.)

So for starters, here's a picture that contains Jackson way down in front in the foreground, and Half Dome, one of the impressive granite landmarks at Yosemite National Park, way up at the top in the background. 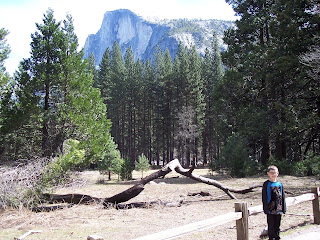 Posted by John Peddie at 3:34 PM No comments: