So we were driving back to the hotel last night from the rehearsal dinner (at Barley’s Brewhaus, but more about that later, maybe), and I told my dad to turn a few blocks ahead of when we should have turned; and as a result, we wound up driving past a Barnes & Noble I would otherwise have missed. (I may well have marked it this morning when we went out for coffee, but who can say for sure?) It was certainly close enough to walk to from the hotel, though my dad thought it was not a good idea at that time of night, because he didn’t know the streets. I wasn’t about to get into how little sense that made, but I got online and mapped it when we got back to the hotel; and sure enough, it was only half a mile away. Google maps even estimated that it would take about ten minutes to walk there from the hotel.

Unfortunately, they closed at ten, and it was after ten when we got back from dinner. This morning, however, we took a walk and went past the bookstore for coffee at Scooter’s (another one of those chains that copied almost everything about Starbucks except the mermaid and the lingo) and then doubled back to the bookstore. We had to go upstairs to get to the newsstand, and I took that to be a good sign. They had a nice, big, wraparound newsstand section that took up three walls and was easily twice the size of the newsstand section at the Barnes & Noble at Clearwater Crossing. I saw n+1 in amongst some political and cultural (but not precisely literary) magazines, and was afraid that that might be it—but then I let my gaze travel along the bottom row (because those kinds of magazines are almost always on the bottom row—you gotta make sure to leave the prominent rows clear for pretentious shit like Esquire) and sure enough, there were the literary magazines, a couple of sections down.

And they had Poetry magazine. But when I got over there and picked it up…it was the May issue. The issue with the Dorothy Parker article that I had my eye on was the April issue. (I may not have mentioned that the last time I wrote about this.) I just can’t win for losing! Though the Poetry issue was disappointing, there were plenty of other interesting titles on the racks—including The Normal School, Boulevard, n+1; and some journals I had never seen before, like The Objective Standard and SubTerrain.

(Yes, I found The Objective Standard to be of interest. I admired Ayn Rand’s fiction and philosophy long before the Tea Party retards co-opted it—incorrectly, of course, but do you honestly expect that conservatives would do anything with philosophy other than misinterpret it and fuck it up?—for their own nefarious purposes. Ayn Rand was not a libertarian, and the only reason the Tea Party retards have latched onto her is because they’ll reach for even the flimsiest branch if they think it will make their goofy ideas look even remotely plausible. Plus, anyone who thinks that Objectivism equals the kind of "Don't tread on me" nonsense the Tea Party retards babble about either hasn't read Ayn Rand's fiction or simply doesn't understand even the basic tenets of the philosophy—but again...that the Tea Party retards don't understand something is not a concept that should come as a surprise to anyone.)

The selection obliterated the selection at any bookstore in Indianapolis that I know of (although it occurred to me as we were going up the escalator at Barnes & Noble that I should go back to the Books-A-Million location at Trader’s Point, because I seem to remember that they had a pretty solid selection of magazines in general, though I don’t recall what they had for lit journals in particular), and almost made me want to move to Kansas City—except that Kansas City is just as midwest as Indianapolis is, and to hear my brother tell it, even hilljackier than Indianapolis. I find that hard to believe, but that might only be because Kansas and Missouri don’t have In God We Trust plates, which sort of give you an idea of the number of hilljacks and bad drivers we have in Indianapolis.
Posted by John Peddie at 10:50 AM No comments:

Clark, I Think This is the Wrong Exit

This is a shot of the St. Louis Arch and the Mississippi River, badly swollen from the recent rains. We're on the road from Indianapolis to Kansas City for my brother's wedding. We started Wednesday afternoon and stopped in Effingham, Illinois, for the night; and then we were on the road again Thursday morning. 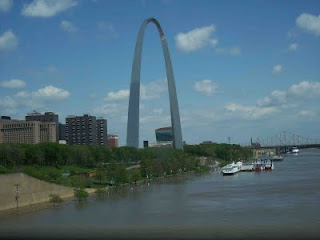 Jackson did pretty well on the trip, considering that he had to endure being strapped into a car seat for eight hours. (Splitting it up into two segments was probably a good idea. Unfortunately, we won't be able to do that on the way home on Sunday.) Despite being good, though, he didn't care much for having his picture taken. 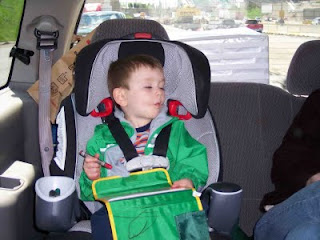 We got into Kansas City with just a little bit of time to kill, and then it was off to the rehearsal. I didn't get any pictures of it, but I think it might have been the first Catholic church I'd ever been inside in my life. Apparently they worship "in the round," because there was a big marble dais in the middle of the charmingly retro sanctuary. It looked sort of like an Elizabethan thrust stage, but I didn't voice that opinion out loud to see if anyone agreed. We were probably pushing our luck with one of the other groomsmen talking about how the building wasn't up to code becuase there were no sprinklers. Jackson eventually warmed up to the girl who will be chucking flowers while he walks down the aisle with a ceremonial pillow in his hands, and I managed to get one almost-respectable shot of them cavorting down the aisle togeher. 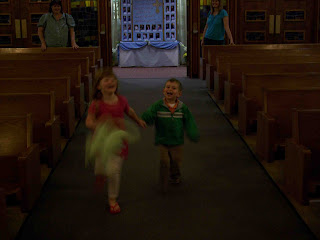 Posted by John Peddie at 9:24 AM No comments:

So you may have heard that Borders is…well…dying, I guess would be the right word for it. They filed for bankruptcy and announced that they were going to close about a third of their 600 stores all across the country. The initial list of closing stores included just the downtown location here in Indianapolis, but a second round of closings gobbled up the store near the Fashion Mall. To my knowledge, those were the only two bookstores in town that carried Poetry magazine, and I am now at a loss as to where I can get my hands on an actual hard copy of the magazine.

I called the Barnes & Noble at Clearwater Crossing, but the gentleman I talked to said that it looked as though they had not carried Poetry since summer of last year. I don’t remember ever seeing it on the shelf there, but it’s just since last year that I’ve really gotten serious about my writing, so it’s entirely possible that I wasn’t really looking during the time when they did carry it. It’s also possible that I just never looked at all, since I always go to Borders first and Barnes & Noble only if the three most convenient Borders stores fail to turn up what I’m looking for.

Today I checked the Borders on the south side and the Barnes & Noble at the Greenwood Park Mall and did not find the magazine at either store, though I was not expecting to. The Greenwood Barnes & Noble has a surprisingly robust newsstand, given where it’s located. (The infestation of In God We Trust license plates is particularly virulent on the south side, to the point that I’m surprised that side of town can support one bookstore, never mind two—and the Barnes & Noble carries Nature, if you can believe it.) I’d give up on the Greenwood Barnes & Noble altogether, except for the fact that they carry—or used to carry—Canteen. I nabbed issues four and five there, but I haven’t seen issue six yet (and according to their website, issue seven is supposed to hit stores this spring).

Even before Borders started closing stores, the Clearwater Barnes & Noble had the best selection of literary magazines—but not Poetry—of any of the local bookstores that I frequent; but I rarely get out to the west side, and I don’t like going to Hamilton County, so I don’t know what the Barnes stores in those areas carry. I hope that Borders can regroup and get back in the game, but I’m not optimistic. Their web presence was a disaster for many years (during which time Barnes & Noble basically cornered whatever parts of the online market Amazon had not already assimilated), and apparently no one bothered to tell them that this time around e-books are for real.

And yeah, John-O the Luddite still wants to be a writer and publish, you know, actual books. What the hell, right? If anyone knows of a store that carries Poetry, I’m all ears. I don’t know if I’d walk a mile for a Camel, but I’d go to Hamilton County for a copy of Poetry.

I know what you’re thinking—that this most recent bumper sticker post was clearly ultra-conservative and right-wing, and also that I said I would not be posting that kind of inbred nonsense. Well…both of those things are true. The bumper sticker is ultra-conservative and right-wing, and I did say that I would not be posting that kind of garbage. Oh well. Sorry. I suppose I should originally have written that I would post both uplifting, progressive bumper stickers and the kind of right-wing verbal diarrhea that only the gun-toting hilljacks who live out where the buses don’t run could seriously support. Unfortunately, this is Indiana, so there are going to be way more of the right-wing ones than the uplifting progressive ones. I guess at the end of the year there may be two polls, one for best bumper sticker and one for most ignorant bumper sticker. You can’t even stand it, can you?
Posted by John Peddie at 1:02 AM No comments: