I've Been Kidnapped By a Guatemalan Banana Monkey!

I wish I had taken a picture of the driveway leading down from the main street to the gate of the River House, the donated apartment house/complex where we stayed in Panajachel. That driveway was very steep, with standing water near the bottom; and when the vans delivering us from the airport in Guatemala City pulled up in front of the River House, we could see, even in the gathering dark, that it stood behind a gated wall, part of which was topped with razor wire. It wasn’t the first wall topped with razor wire I had seen that day, though the others had been in Guatemala City, which I had both read and been told was quite a bit rougher than most of the rest of the country—and yet there we were, arriving to stay at a place surrounded by a wall partially topped with razor wire. Not that there was anything to be done about it – the drivers were already unloading our luggage from the racks on top of the vans, and one of our trip coordinators was opening the door in the gate to let us into the compound. (I never quite stopped thinking about it that way.) And even though it was dark by that time, it was still obvious, if not quite as dramatic, that what lay outside the gate of the River House was much different than what lay inside, which was this: 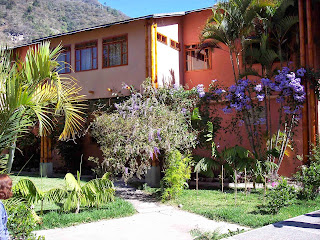 That was our first glimpse of what the next week, in part, was going to be like for us in Guatemala; but I had a hard time shaking some of the things I had seen on our way to Panajachel. There was all of that razor wire I mentioned a moment ago, topping the walls of not a few buildings (and other compounds—there’s that word again) we saw on the road from the airport in Guatemala City. Some of those buildings were abandoned and crumbling, and some of them had rebar jutting up along the edges and corners of the roofs. We were told that the reason for the exposed rebar was so that if money were ever raised to finish the building in question, the contractor would have an idea of where to begin the work again, so that the building would retain roughly the same kind of structure it had had at the beginning of the project. There is no system of credit in Guatemala, at least as compared to the United States. If a construction project runs out of money, they just stop where they’re at. 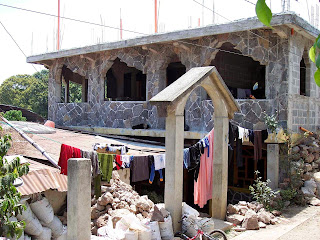 People in Guatemala get by with much less than we do in the United States, but it’s difficult to appreciate the truth of that idea unless you see it for yourself; and once you’ve seen it, it’s hard to shake it. We saw and did a lot of amazing things—and I’m not much for using the word amazing in that kind of context, for pretty much the same reason Sam doesn’t like to say “I love you” in the film Ghost—in our short time in Guatemala; but there was also much that we saw that brought the truth of what it means to live among the middle class in the United States into sharp relief. This is the room where the students we worked on the basketball/soccer court for go to school every day: 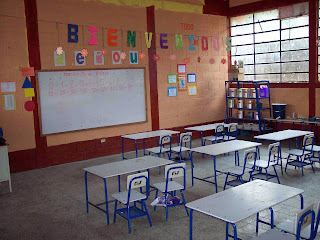 They attend school for five hours a day, and public education in Guatemala, especially for the least well off people in the rural communities, generally stops at sixth grade. One morning, we stopped at Nueva Esperanza, a community that had been created for people displaced by Hurricane Stan. There, we were able to see the results of a previous project that Mission Guatemala had completed—a kitchen with cinder-block stoves, seen here being used by a group of women who are making tortillas by hand (in traditional Mayan dress): 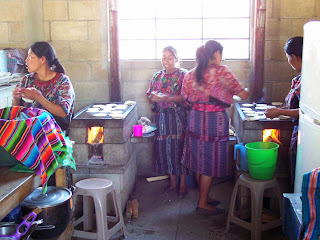 You may not think it looks like much, especially compared to what you probably have at home; but it was a major upgrade over what they had before, which was this: 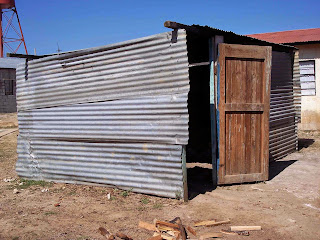 I cannot properly convey the spirit of so many of the people we met during our time in Guatemala. I’m sure they’re not all happy-go-lucky, and maybe many of them put on their bravest faces for us because we were easy marks who were eager to spend money on souvenirs; but there is a warmth and kindness to these people that cannot but alter your estimation of what constitutes a full life, a life well lived.

And yet it already seems far away. We’ve been back for a little over three weeks now, and it was all too easy to slip back into my routine. It would have been very easy to sit back and write a series of posts about everything we got to see and do while we were there, everything our position of relative privilege bought us, to post pictures of mountains, volcanoes, art, the surprisingly touristy streets of downtown Pana; but I couldn’t just look away from what was difficult to see. A lot of the pictures I took in Guatemala are of scenes that would not necessarily strike one as picture-worthy. I wanted to be sure I would be able to remember everything, and what all of it meant to me, because I knew it would fade once I returned home.

I know I won’t forget the six-person tuk-tuk ride, or stepping into a brothel half by mistake, or the Spanish guitar at Circus Bar the last night we were there, or what one of the guys in the group looked like wearing the traditional Mayan skirt his wife had bought for herself, or the way a little boy named Brandon Omar (all of seven years old) ran up to me and gave me a hug out of the clear blue sky the day we stopped in Nueva Esperanza, or the guy who tried to sell me marijuana (“Weed cheap!”), or the beautifully simmered black beans and handmade tortillas and fried plantains that we seemed to eat a little bit of every day we were there. I’ll write about the touristy stuff and post those pictures later. It was the less touristy stuff we saw and did that often made the biggest impression, and absolutely made me want to redouble my efforts to “live simply, so that others may simply live.”
Posted by John Peddie at 6:46 PM No comments:

Has anyone ever thought it a good idea to read A People’s History of the United States concurrently with any part of In Search of Lost Time?
Posted by John Peddie at 12:05 AM No comments: