Down by the Creek, Walking on Water 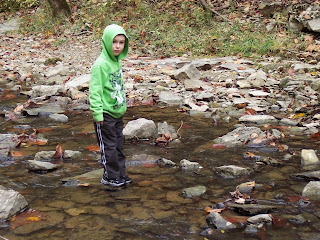 Last Wednesday we went down to McCormick's Creek State Park, which is just west of Bloomington on 46 - and is, in fact, closer to Bloomington than Brown County State Park; and yet for some reason, this was the first time we ventured the other way on 46. We had an incredibly good time, and Jackson did a really great job on the two most rugged trails in the park. (Truth be told, I'm not sure we were actually on the trails so much as we were just wandering back and forth across the actual creek itself - though that was certainly as rugged as the trails would have been.) I took over 200 pictures, though many of them were action shots that were too blurry to use. I managed to cull 25 or so that I thought were worth posting on my photo site.
Posted by John Peddie at 11:11 PM No comments:

Here in week three of a Peddie Family Vacation Trifecta, Amy and I both have the week off at the same time, while Jackson is back at school; and that means lots of opportunities to try new places for lunch. Yesterday we knocked out one of the places that has been near the top of my list for a long time but which was hard to fit in with Jackson in tow, due to the fact that they don’t serve any type of breaded and fried chicken. There was a period there where Jackson was very willing to try new things to eat and managed to develop a taste for things like chips and salsa, hummus, quesadillas, and even broccoli. Unfortunately, that phase seems to have run its course for the time being.

But with him at school, we have the run of the city—and others nearby—and so yesterday afternoon we noshed at Rook, a relatively new Fletcher Place eatery in one of those fancy new mixed-use development deals that are popping up all over town. I can’t think of another place I have been to that uses holes in the drywall as a design element, but that’s the case here, as a “downed power line” pokes through the wall and extends out across the ceiling. You walk up to the counter and order from a lunch menu that consists entirely of bánh mì sandwiches with various fillings that evoke the flavors of Asian street food—Chinese barbecued pork, Indian-spiced tofu, and Thai sour sausage, to name a few. (All of the sandwiches on the lunch menu are $8, and a handful of sides go in the $2-$6 range. A recently-added dinner menu expands the lunch offerings and adds new items, with prices ranging from $6-$12.)

The sandwiches are topped with a delicious sweet and sour cabbage, carrot, and pepper slaw that just barely overpowered the flavor of the Indian-spiced tofu on my sandwich. The balance of flavor in the slaw by itself was impressive, but could have done with something a bit more dynamic in there—a touch of spice from the peppers, maybe; and those pillowy bánh mì rolls, while light and airy, are also not sturdy enough to soak up the moisture from the slaw and the thin coating of some type of mayonnaise that dresses the sandwich. On the other hand, tofu itself is fairly delicate and tends to get lost in the shuffle, especially when it’s added to the menu as an afterthought; and despite the fact that this is a place that serves Asian food, I definitely got the impression that this was a menu calibrated to showcase the hardier proteins favored by carnivores.

Also, because this is an Ed Rudisell joint, like Black Market and Siam Square, you may have a hard time eating economically and also feeling fully sated. We haven’t tried Black Market yet, but Siam Square is one of the best restaurants in Indianapolis, even if the portions seem a little bit anemic for the price. The same can be said for most of the restaurants in the Martha Hoover empire, but they are minor quibbles in both cases. Rudisell and Hoover are doing some of the best restaurants in the city. Rook is a nice addition, but it doesn’t hit the back-alley vibe it’s shooting for—in much the same way that Café Patachou doesn’t hit the “student union for adults” vibe it claims to be shooting for. I’m not quite sure that it gets to the level of pretension in either case (though I am closer to sure about Hoover’s M.O. than about Rudisell’s), because I think the efforts are genuine—they just seem to wind up being a little bit fancier than they aim to be.

I almost didn’t go to Tin Comet this afternoon. Once I shook the cobwebs loose and got the writing to start working for me, it really started working. I figured out a scene in which I wanted one of the characters to talk about the scene in The Godfather when Luca Brasi is garrotted, and how that scene is sanitized compared to what would really happen when someone is garrotted (for example, early scenes in either Eastern Promises or No Country for Old Men); and I wanted to keep it going, even though I had limited time due to hitting the snooze button way too many times (again).

But a nip into a great coffee shop can do wonders for your day, even when your day is already humming along quite nicely. To wit: on the chalkboard behind the counter at Tin Comet this afternoon was writ the following: Happy Birthday Mario Puzo. Yes, and Matt was talking to a customer at the counter, a pretty woman with pixie hair and a gypsy skirt, who might well have been Francesca, from the carnivel troupe in Clockwork Angels. I wasn’t trying to eavesdrop, but I heard Francesca say that she liked some person’s writing, and Matt asked if she was a writer too—and for just a minute I could see through the looking glass to a place where writing is important to people.
Posted by John Peddie at 3:21 PM No comments:

Tin Comet Coffee has opened for business at 2119 East 10th Street, here in Indianapolis. Their first day of business was this past Saturday, and the only reason I knew about it was because of Facebook—which does, yes, make me sad. I’ve been keeping an eye on their real website, as well as driving by the storefront, hoping to catch some information on their opening the old-fashioned way—but it was not to be. I just happened to Google them the other night at the old juke joint, and the first hit was a Facebook page I didn’t even know they had. Therein lay the information, and due to a bit of scheduling good luck, I was able to stop in on opening day, wish them well, and get a hot cuppa to go.

I feel like I’ve been wandering in the desert, vis-à-vis coffee, since Lazy Daze closed. We have lots of fine indie coffee shops in the metro area, but I was doubly lucky to have Lazy Daze because 1) it was close, and 2) it was the best. There are some newbies that I haven’t tried yet, like the pour-over thing happening at Bee Coffee Roasters in Pan Am Plaza, as well as Foundry Provisions, up near where Herron used to be; but I’ve been to most of the veteran coffee shops in the metro, including Monon Coffee Company, Funkyard, Strange Brew, Calvin Fletcher’s, Cups, South Bend Chocolate Company, Hubbard & Cravens, and Yogülatté. I also found myself inside the evil coffee shop at Washington and Audubon after Lazy Daze closed, out of sheer desperation sometimes.

None of those places holds a candle to Lazy Daze, and the evil coffee shop is the only one close enough to walk to (but of course, they burn their beans, which fucks up the way you taste coffee and makes you think that correctly roasted coffee is weak). And while some of those other places have their points of interest—proximity to the village for Monon, the giant fish tanks and Holiday Grogg roast at Strange Brew, the art on the walls and the improbable rack of $2 CDs (and gelato) at Funkyard, the yogurt and proximity to Mass Ave and the rest of downtown at Yogülatté—none of them have the warm quirkiness that Lazy Daze had, which was dirty in a good way (like Lady Gaga or Drew Barrymore) and seemed to have grown straight up out of the roots of Irvington. I imagine that I am a little bit biased because I live in Irvington and have been connected to it, in one way or another, for all of my life; but they were firing on all cylinders at Lazy Daze, and Irvington is that much more drab and empty that they are gone.

Also, their coffee was the best. Strange Brew was second in that department, but that one is way down on Smith Valley Road, damn near out to 37. There’s just no way to justify going that far out of my way for a cup of coffee. They close at noon on Sunday, too, which eliminates them from consideration if we happen to be out and about on the south side on my day off. About the only time I get down there is on my way to or from Bloomington—and even then, I have to consider whether I will want to get coffee at Runcible Spoon, which is nearly as good as Lazy Daze was (including, and perhaps especially, dirty in a good way), but which is, in point of fact, in Bloomington.

Now comes Tin Comet, in St. Clair Place on the near east side. It’s not dirty, in either a good or bad way, but rather clean and bright—which is exactly what 10th Street needs as it inches its beautification ever further east, toward the very rotten stretch between Rural Street and Sherman Drive. It’s not close enough to walk to, but it’s just down the street from Jackson’s school, and is very easy to access on my way downtown. Jackson and I popped in today on our way downtown—my fourth visit in the five days they’ve been open. I’m a little bit biased toward Tin Comet because I am acquainted with the proprietors, one of whom was the finest barista Lazy Daze ever had; but the ambience is wonderfully eclectic, in the very best sense of that word—the music you hear playing when you walk in is coming from a living, breathing turntable, spinning those black circles—and the coffee is awfully good, too. I’ve only had the espresso drinks, but will get around to trying the drip coffee at some point. (And I’m hoping that maybe they’ll tweak that espresso machine to make the shots a bit stronger, too.)

There is life on the East Side! Get out to the Comet, people!

Having now been heckled by two different family members for not posting photos of Jackson as often as others would like, and being possessed of a bit more free time these next couple of weeks, due to Jackson's being on fall break, I thought I'd have a go at doing this somewhat more regularly. So here is a picture of Jackson negotiating pizza. 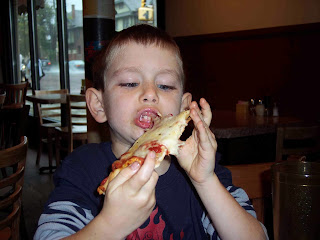