We Already Have a George

I keep having these ideas for things that I want to write about, and then when it comes time to start writing each night, I work on the long Irvington novel I have been wanting to write for awhile now and which I kick-started last November by forcing myself to work on it during National Novel Writing Month. And every now and again I think that I should maybe work one of these longer posts up into an actual non-fiction essay and submit to some literary magazine or other. I usually don’t have that thought for very long (and am, in fact, well aware that it is some kind of delusion of grandeur).

My half-baked thought for today is that I wish I had left Barnes & Noble for last, like I usually do when we go to Bloomington. Hot on the heels of that thought, though, is that we did everything ass-backwards today. We ate before we went to Bloomington. What the hell is that? If there’s even the slimmest possibility that a trip to Bloomington could be in the offing, then lunch or dinner—in Bloomington—becomes part of that equation. I don’t remember the last time we went to Bloomington and didn’t eat there. But Amy’s been clambering for Indian food lately, so we swung by a place on the south side called the Clay Oven.

And then I drove into town the wrong way and parked on the wrong side of campus—because I wanted to reconnoiter the construction on the bypass to see if going by the bookstore later in the day was going to be a bad idea, adding rush hour traffic to the cluster fuck going on at the intersection of College Mall Road, 3rd Street, and the bypass. The construction looks finished from 17th almost all the way around to 10th Street, but you can’t turn toward campus onto 10th Street, and it’s still pretty much a war zone from 10th Street south to the mall. I decided to go ahead and pop in at Barnes & Noble so that it would be out of the way.

I was hoping to find the new issue of n+1, which the stores in greater Indianapolis have stopped carrying—surprise!—and to see what else they had in the way of literary magazines. Lately it seems as though the Bloomington branch of Barnes & Noble is about the best place there is to look for literary magazines (other than on the magic internets), but even their selection isn’t much to write home about. However, they did have the new n+1, which I gobbled up; and I also got the Athlon pro football preview book, just on a lark. There’s a story on Andrew Luck, and also one on Peyton Manning in Denver, both of which should be interesting.

And then I parked on the wrong side of campus. We almost always park somewhere west of Indiana Avenue, usually on 4th Street or 7th Street; but today I just sidled up to a spot on Union Street, alongside the gigantic new residence hall they built by demolishing a good chunk of Ashton Center (including the Center Building, where I spent many an evening in the dishroom, but not Hershey Hall, where I lived as a freshman). It was nice to hit those old Ashton Center stomping grounds again, which we don’t always get to when we park on the other side of campus. Then we went over to the Union, where I found a copy of the student literary magazine (distribtued gratis) in a little rack that was hidden off to the side inside the Starbucks they built inside the Union.

Then we went downtown. We were having a nice trip to Bloomington, which the last several had not been, and I wanted to walk around the courthouse square to see if any new places had popped up since last we had really been down to look around; but then we got to the corner of Kirkwood and Walnut, in front of the Trojan Horse, and I looked across Kirkwood and saw the little book shop called Book Corner. I am positive I never went in there once when I was a student, and I am pretty sure that I have only been in there once in the time since I was a student. I don’t think this affinity for literary magazines had struck the last time I was in, because I’m sure that, had it done, I would have remembered that they have a great selection of literary magazines.

Instant buyer’s remorse, of course. They had the new issue of n+1 that I had already bought at Barnes & Noble, and I stood there for a few seconds staring at it numbly on the rack at Book Corner. In the backpack on my shoulders was something I had bought at a chain bookstore when I could have had the very same thing—for the very same price—at this independent place; and I should have known better, because I knew the Book Corner store was there. I didn’t look for the Athlon pro football book, because it doesn’t matter if they carry that kind of thing or not. I’m not always in the market for that one, and it only comes out once a year, anyway. What I did also look for was Film Comment—which they had. They did not have the Indiana Review or New Letters, which Barnes & Noble had, but both places had Zoetrope All-Story, Poetry, Glimmer Train, and the Paris Review. Book Corner also had the Georgia Review, the Kenyon Review, Pleiades, Verse, the Baffler, and a handful of other things that I can’t recall right now right off the top of my head.

Some things you just learn the hard way, I guess. I’ll take some small measure of comfort in the fact that by buying n+1 at Barnes & Noble this time, I voted there with my dollars, and let them know that there is at least a little bit of interest in that magazine. I do wish, though, that I had left Barnes & Noble for last, like I usually do. Then I would not have already bought the magazine when I popped into Book Corner, and I could have voted with my dollars there, which would have been much more satisfying. I’m already thinking ahead to my next trip down to Bloomington, and hoping that the floodgates don’t open so wide that I drop an obscene amount of money—though the temptation to do so is going to be considerable.
Posted by John Peddie at 1:57 AM No comments:

Jackson Goes to the Movies 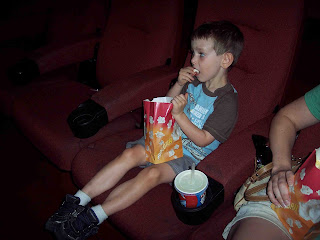 I hadn’t planned on going to see my first movie in a theatre in I don’t even know how long the very day after finishing The Good, the Bad, and the Godawful: 21st Century Movie Reviews, by Kurt Loder. (Yes, that Kurt Loder.) But it was a little bit too hot and humid for a walkabout after Amy and Jackson got back from Vacation Bible School at their church; neither of us had pressing needs at any of the various emporiums around town; and then Amy floated, once again, the idea of taking little Jackson to his very first movie ever. It was inevitable, of course, that this day would come; and it was inevitable, too that this would be one fatherly duty I would not somehow be able to shirk, given that one of the few things I’m any good at is getting things for free at the big movie store.

It’s not exactly that I’m averse, on principle, to taking my son to the movies. It has more to do with the fact that he just has so much energy that I have never really believed that he could sit still for an amount of time that gets anywhere near two hours. He also doesn’t do quiet very well, and I’ve worked in the damn fool exhibition industry for long enough to have developed a strong disdain for those who bring to the movies kids they know damn good and well aren’t going to be able to comport themselves in a manner approaching that which is appropriate. There is some latitude with a kid’s movie, of course, but Jackson ain’t never been what you would call docile.

And there was also the possibility of an automatic out—there not being a show time that would be convenient for us. We don’t plan these kinds of things, even when it’s just the two of us trying to find something to go see on those rare occasions when we have time alone together and nothing better to do. But wouldn’t you know—when I called the recording for Glendale, at around two this afternoon, there was a 2D Madagascar 3 at 2:45, which gave us plenty of time to get all of our truck together and get on up there.

Would you believe that it worked like a charm? We got there with time to spare, so that when the cashier fumbled my employee discount card—yes, there is an employee discount card (would that Brent Spiner, in full hillbilly mode, could have been the one to hand it to me when the program launched)—there was still no chance that we were going to miss the start of the film. We even got to watch some of the fancy intermission slides, with trivia questions and everything. (The answer to one of the questions was Jim Jarmusch, and though I missed the question, I paused while walking to my seat and just gaped at the screen. I’m not all that familiar with the Glendale clientele, but I would hazard a guess that only a very small percentage of them would know the answer to a trivia question that required them to know anything at all about Jim Jarmusch.) 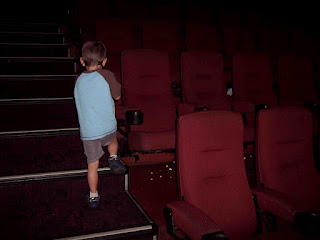 The movie wasn’t even that bad. (I had planned for this post to be both a review of the film and a comment on taking Jackson to his first movie, but it turns out that I have run at the mouth long enough for it to be just the Jackson comment.) I sort of wish I had known beforehand that Jessica Chastain’s voice was featured in the film, but that might just have resulted in an awkward moment in medias res wherein I declared to my wife my abiding love for Jessica Chastain, which would have been all kinds of awkward. An even better surprise was that the film was co-written by Noah Bamubach (my wife already knows how much I adore Noah Baumbach’s wife).

An actual review of the film may yet be forthcoming; and I got a few pictures of Jackson inside the auditorium, though I haven’t looked at them yet because the battery in my camera died and takes forever to recharge. Those pics may eventually be forthcoming, too.

(Note: Apparently Noah Baumbach and the wife of his to whom I was referring have split up. I have no idea who he may have bagged since the split, so in case there's some question as to the wife of his whom I adore, I was totally talking about Jennifer Jason Leigh.)

I think George Carlin would have loved the cultural shift—one word, one syllable to two words, four syllables—from mall to lifestyle center.
Posted by John Peddie at 1:03 PM No comments:

I know...this can't go on forever. Eventually he's going to quit letting me take so many pictures of him. He's also eventually going to be a teenager, which is going to suck out loud. But at this point, he's still pretty cute, and still mostly a good boy—so here we go.

I’m going to go ahead and assume that Jann Wenner is not the second person who voted in my little poll about the Rock and Roll Hall of Fame.
Posted by John Peddie at 1:39 AM No comments: