And Even Another Way is, He Was Thrown Out of a Window, by Marsellus, Because of You.

I don't regret supporting Hillary Clinton in the 2016 election. Like most folks, I never really believed that a half-melted Cabbage Patch doll* could win the presidency; but I also had a hard time believing that a real liberal like Bernie Sanders could drive more than his wing of the Democratic party to the polls. I don't think the lesson of hindsight is that Bernie should have gotten the nomination; I think the lesson of hindsight is that we should have recognized the danger of Trump's insurgency and done more to shore up support for Clinton in the Rust Belt states that turned the election for the Nazi dumpster fire - Pennsylvania, Ohio, Michigan, and Wisconsin.

Still...every now and then...I guess you can't help but wonder...

(You know you belted the part from the end of the song. So did I.)

Whence this bizarre outpouring of affection for Senator Bernie Sanders? Heather included a link to the following tweet of his in a comment to one of my previous posts: 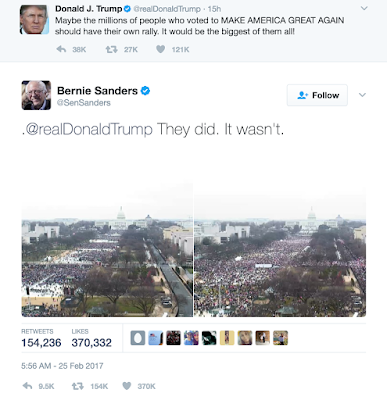