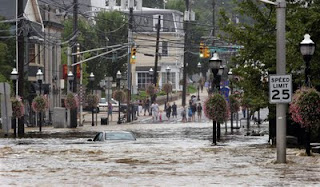 Yeah, I know—are there any non-hilljack Republicans? Bobby Jindal. That’s it. The rest are batter-dipped and deep-fried just like fair food.
Posted by John Peddie at 9:49 AM No comments:

How stupid are Americans? An ultraconservative science-ignorant prayer freak from Texas is making waves in the GOP race for President…again.
Posted by John Peddie at 9:41 AM No comments:

And This is the Explanation of the Test

Though I have sporadically posted photos of Jackson over the years, I have never posted any videos of him. The same camera we take pictures with also shoots video, and I’ve shot plenty of little movie snippets of Jackson over the years; but I’ve never had the means to post those video snippets on my blog. The reason for that is simple—stupid, but simple. I did not have high-speed Internet. (And yeah, I can hear the collective gasp from the crowd. “You didn’t have high-speed…does that mean…have you been using dial-up all this time?”)

Yes. I have been using dial-up all this time—and really, it hasn’t even been that much of a bother. The handful of websites I go to regularly—msnbc, Weather Channel, the library, my blog (and the blogs of others—all of which, oddly enough, are Blogger blogs), IMDb, and the Yats website to check the menu—work reasonably well with dial-up; my computer is still relatively zippy, even though it’s well over two years old; and the Safari web browser is pretty freaking fast, even with dial-up. Other than that, I mainly use the Internet for reading—and text loads just about instantly no matter how fast the connection.

I also figured it would probably be a hassle to switch over to broadband, even with IQuest (or Lightbound, or whatever the hell they’re calling themselves this week), which is an extremely unobtrusive—and extremely reliable—service provider. Then there’s the matter of this lonely attic room I live in. It has a grand total of two wall outlets—neither of which is grounded. However, with a surge protector/power strip and a couple of extension cords, I’ve managed to rig it to where I have power from one end of the room to the other. (The attic isn’t all that big, but it does run the length of the house.) Telephony is a bigger issue, though. There’s no phone jack up here. I had to run a phone cable from the floor jack downstairs, up a wall, across the ceiling, and through the air vent to be able to plug it into the phone port on my surge protector. Then another phone cable goes out of the surge protector and into my computer. If going to broadband was going to be anything more complicated than that, I was going to have problems. I knew I was going to have to make the switch at some point, but I was sort of holding out for the day when I got my credit cards paid off and could potentially afford an iPhone. I would be able to configure the phone as a Wi-Fi hotspot and use that for my Internet connection.

Oddly enough, though, Apple forced my hand before I could get to that day. They started the forced march away from dial-up, with the line of unibody aluminum notebooks that came out in 2008, by omitting the internal modem from those computers. They were not entirely dismissive of dial-up users, however, because they also started to sell an external dial-up modem that you could buy separately. I bought one of those modems when the internal modem on my iBook G4 died, but the iBook wasn’t powerful enough to support the modem. Then I bought one of the unibody aliminum MacBooks, configured the external modem, and went about my business.

Last month, Apple put an end to the sideshow altogether, with the release of Mac OS X 10.7, code named Lion. It was the first major upgrade to the Mac operating system in a number of years, and there was a lot of buzz over the way it brought a goodly portion of the iOS experience to the traditional Mac desktop. I read a lot about all of the new features of Lion—including that it would only be available as a download from the Mac App Store, which meant that I would have to download it at work by sponging the free Wi-Fi at Nordstrom (which is hella faster than the mall’s Wi-Fi). What I did not read about—probably because no one imagined that there might be Mac users who were still rocking the Internet dial-up style—was that Lion would not support the Apple USB modem. The way that I discovered this was by bringing my computer home the night I downloaded and installed Lion and reading the error message at startup that told me I could not use an Apple USB modem with this computer.

It should not have come as a surprise, because Apple has been doing that kind of thing for years—they phased out floppy disks with the first iteration of the iMac, they dumped internal modems, and now it looks like they might be contemplating the phase-out of the optical drive, which means no more CDs or DVDs. But all’s well that ends well, I guess. I called IQuest and signed up for their DSL, which costs $28 a month (double the rate I was paying for dial-up), plus $63 for the DSL modem; and I was back up and running in just a few days. The modem was no problem to set up, my computer configured it automatically, and I only had to add one plug to my power strip. I was able to use my existing phone cabling without changing a thing, except to hook up a couple of DSL filters on the two floor jacks downstairs. And now I’m cooking along even faster than when I used the Nordstrom Wi-Fi at work. IQuest claims 1.5 Mbps downstream, and a third-party network monitor app that I use shows my actual throughput to be just a hair slower than that. It took me about nine hours to download Lion at work—when I re-downloaded it at home to make a bootable startup disk with a flash drive, it took about six hours.

I don’t really have an ending for this. It was just a long way around explaining why I have never posted any videos of Jackson. It also partly explains why I’m so inconsistent about posting pictures of him, which actually works with dial-up (unlike posting videos, which does not)—but takes a really long time, on top of the time it takes to go through all the pictures on the camera and sort them out. I will once again pledge to try to be better about posting pictures and to not get bad about posting videos. This first video is a short clip of Jackson watching a train up close. We were out for a walk on Wednesday and just happened to be walking down Audubon Road, south of University Avenue, when we heard the train’s whistle. We were still a few hundred yards away from the tracks when the train started to pass, and Jackson encouraged me to go faster, so he could see it—which, obviously, he did.
Posted by John Peddie at 12:49 AM No comments:

This is Only a Test

I just noticed that my invoice for Poets & Writers says, “Your first issue is on it’s way.” The people sending the bill must not be writers.
Posted by John Peddie at 12:54 AM No comments:


Keep the Immigrants
Deport the Republicans


Si, por favor. That was a bumper sticker on a car right here in Irvington. And if anyone ever actually runs on that platform, I'm totally voting for them.
Posted by John Peddie at 11:18 PM No comments:

Escape Is Not His Plan. I Must Face Him, Alone. 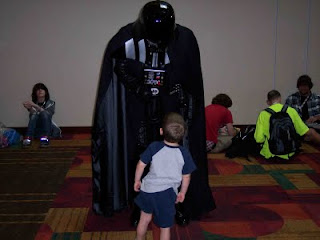 Posted by John Peddie at 5:11 PM No comments: