“We took our number one selling IPA, Northern Trippin with its fruit filled nose and soft bodied citrus flavor and created a session version for your enjoyment. We added loads of Citra and Mandarina to the dry hop to create that juicy yet sessionable experience for Northern adventure.”

Um. This is utterly unremarkable in every respect; it’s so unfit to be called beer that it could run for President as a Republican; and if it were a soft drink, it would be Caffeine Free Diet Coke. 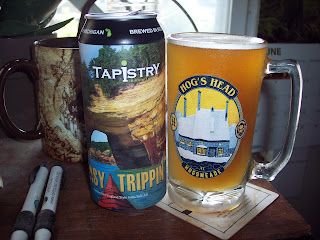 Posted by John Peddie at 3:43 PM No comments:

Strong mango flavor up front, and just the hint of a dry finish. The 6.3% ABV is sort of amusing, but I feel like this should have more of a punch to it, somehow. It’s good, but it’s not especially interesting. 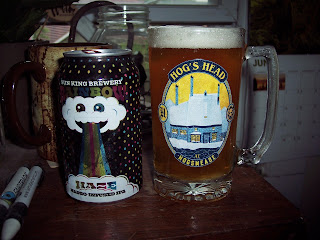 Posted by John Peddie at 3:38 PM No comments:

You can recover from being a Republican. Just promise that you will never vote for anyone who played football and got hit in the head a lot.
Posted by John Peddie at 8:56 PM No comments:

Someone should go around and take all the guns. I would love to watch these uneducated, inbred, right-wing fuckwit assholes pitch their fit.
Posted by John Peddie at 4:51 PM No comments:

Labels: 140 Characters, Why Indiana Sucks, Why Republicans Suck, Why This Country Sucks

459. Wooden Cask Brewing Company (Cincinnati, OH) - Batalla de Puebla “Tequila Barrel Aged Lime Gose.”
The one I tried at the York Street brewery yesterday tasted much more strongly of tequila. This one, out of a can and at home, is more balanced. The lime flavor is soft, but prominent, though not overpowering, in both iterations. The one I had yesterday at the brewery was very impressive with that strong barrel flavor. This one is slightly less so, but still pretty good. It’s surprisingly complex for a gose—and very pleasantly boozy at 7.7%. 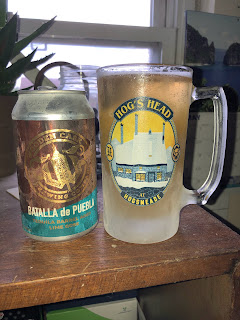 The other two beers I tried in the taproom were somewhat forgettable IPAs. Seems like barrel aged might be the way to go here. I didn’t even have this brewery on my radar while I was looking up things to do for our three-day weekend in Cincinnati. We just happened to park ourselves near the outpost at Newport on the Levee while Amy used her phone to see about tickets to the aquarium. I looked up the brewery while she was doing that, and when it turned out that we couldn’t get into the aqauarium for three hours, we decided to walk back up into Newport proper and see about the York Street taproom.

460. Wooden Cask Brewing Company (Cincinnati, OH) - RedRum “Rum barrel-aged Irish Red.”
This one was not on tap at the York Street brewery, but when I saw it in the carry-out cooler, I knew I had to try it. The rum flavor is very strong, and it works well with the roasty characteristics of the red ale it’s based on. The sharp bite of the rum and the high ABV (8.8%) were more evident in the one I drank last night in the ice cold hotel room; now that I’m back home in my poorly-ventilated aboveground lair and it has a chance to warm up about three seconds after I pour it, the flavors are much smoother. I’m not sure which I like better, but either way, the beer is excellent. 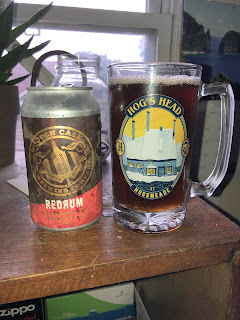 Posted by John Peddie at 5:13 PM No comments:

We should be able to sue the NRA over all the school shootings. Those assholes bought Congress, and they should be held fucking accountable.
Posted by John Peddie at 6:00 PM No comments:

Red states should be called yellow states because of how fucking afraid they are of those who don’t look, sound, or think just like they do.
Posted by John Peddie at 4:29 PM No comments:

“This extra-large version of our flagship Hi-Pitch IPA gets seriously hopped with classic West Coast hops resulting in some eye-opening dank & citrusy aromas. Expect distinctive melon and grapefruit flavors to balance out the malt in this dangerously drinkable double IPA.”

Yeah, but the can says “Extra Hoppy and Tropical.” There’s a flavor you think of when you hear the word “hoppy,” and that flavor is not present here. I don’t taste a distinctive flavor of any kind, but that doesn’t make it bad. It leans toward the sweet and fruity, with just a touch of boozy dryness on the back end. They’re right about it being dangerously drinkable, though; and the price is right, too—at least at Stoney’s, over here on the east side. You hear all this shit about inflation and supply chains and Putin and whatever the fuck else since the world shit the bed two years ago—but this bad boy was $12.99 for a six-pack of tallboys at 9%. That works for me, even if they don’t know what the fuck they’re talking about. 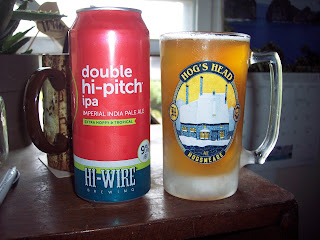 Posted by John Peddie at 4:24 PM No comments:

Anyone in Nebraska who still has one or two synapses firing must be thinking that their governor has been fucked in the ass by Donald Trump.
Posted by John Peddie at 12:04 PM No comments:

There’s nothing left but insulin shock therapy for these inbred sociopaths, right? Every single one of you morons needs to fuck off and die.
Posted by John Peddie at 11:49 AM No comments:

“You got your Chocolate in my Peanut Butter…From the 2020 edition of the 12 Days of Milkshake Stout.”

Quaff ON! has set the bar almost impossibly high for this style (regardless of whether it’s a porter or a stout) with the peanut butter version of Busted Knuckle, so it would certainly not be out of line to question my objectivity here. Having said that, this one isn’t bad. The lactose is a little heavy, and the ABV is only 5.5%, so the balance is a little off; but the peanut butter flavor is nice, and that low ABV does mean that you could drink a couple of them (provided you were not concerned about slipping into a diabetic coma from all the sugar). I don’t like it enough to drink more than one at a time, but I do have a rare unencumbered Wednesday off today, so I’m going to try an experiment. I have one can of Black Acre’s Saucy Intruder (rye IPA) in the fridge, and I’m going to try that out of the mug right after the milkshake stout—just out of curiosity. I don’t know that a spicy rye IPA and the dregs of a peanut butter cup milkshake stout are going to play well together, but I’m curious; and, once again—unencumbered day off. After that, a second milkshake stout into the same mug, to see if the dregs of the rye IPA shore up any of that cloying sweetness. 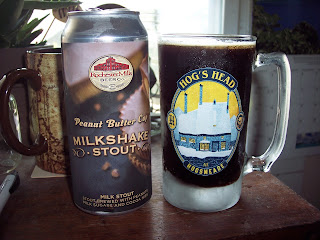 “‘All Aboard!’ for a beer packed full of flavor! A healthy mix of base and specialty grain brings a rich and roasty malt character together with the mild bitterness of locally roasted coffee beans. Milk sugar is added to balance the flavor with a creaminess that will make this sweet stout your new favorite dark beer.” 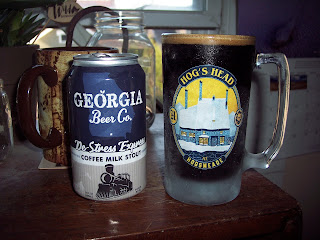 Posted by John Peddie at 8:25 PM No comments:

This is a very fine cream ale with a smooth finish and a very low ABV (4%). Very nice place to stop in for a drink if you’re ever in Crystal River, Florida. 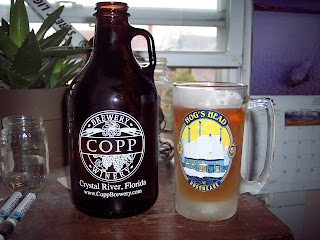 Posted by John Peddie at 6:03 PM No comments: 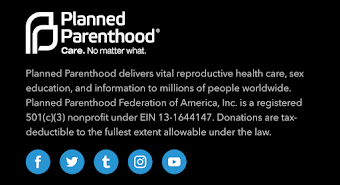