The Senate can’t even confirm a Librarian of Congress in a timely fashion? Mitch McConnell has to be the most useless person alive on earth.
Posted by John Peddie at 2:14 AM No comments:

Before this year, I had been to three national parks in my life: Grand Canyon (twice), Mammoth Cave (twice), and Mount Rainier. (Those are the ones that I can recall having been to, anyway. It's possible that we got one or two more during family vacations when I was a kid.) So far this year, we have been to five national parks, increasing my total by 167%. We hit Yosemite, Sequoia, Kings Canyon, and Joshua Tree on our pilgrimage to see a moose back in March. Today, we got back from a trip that was originally just supposed to be an outing to Cedar Point, but which happily turned into a mini-vacation that netted us another national park, due to my misinterpreting when Amy would want to leave for Cedar Point. That misinterpretation meant that I had to ask for an extra vacation day from the old juke joint - and the extra day meant that we got the chance to spend most of this past Thursday wandering around Cuyahoga Valley National Park, which is in northeast Ohio, between Cleveland and Akron.

Once again, I'm going to lead with just one photo of Jackson, and hope that this inspires me to write some more about this park, and to post more pictures of our little boy while he can still be considered a "little boy." I don't know what constitutes an official "growth spurt," but he's in the throes of something that's going to have him on the threshold of adolescence before long. He's really into Minecraft these days, and he spends more time than I would like for him to spend watching Minecraft videos on the magic internets. Tonight, he showed me something he was building in the game, and he said that it was for his Minecraft "tutorials." Not so long ago, this was a little person who was incapable of speech and who could not feed himself. Now he's developing tutorials for Minecraft - with plans to post them on the internet, of course. Darwin help me. This picture is of Jackson contemplating Brandywine Falls, at Cuyahoga Valley National Park.

Why are we here?
Because we're here.
Roll the bones. 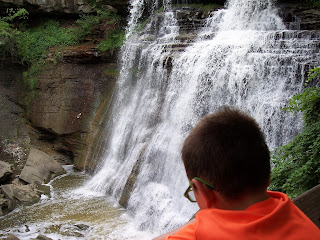