Nice crisp finish, with subtle fruit up front. The wide world of the interwebs tells me that Meridian hops bear flavors of lemon, mixed berries, and tropical fruit. Don’t think I recall “mixed berries” as a flavor note in anything I’ve encountered so far, but I do get hints of it. Sultana apparently features pineapple, pine, and citrus. I still have a hell of a time locating pineapple (or else it’s just so generically “tropical” that when I taste tropical fruit, I’m really tasting pineapple), and I don’t get much pine, either—but that might be hitting me on the back end with that slightly bitter finish. The lemon comes out more as the beer warms up, and it seems like there’s less lactose in this one than in the some of the others in the series. Another very interesting beer—I seem to be on a roll. 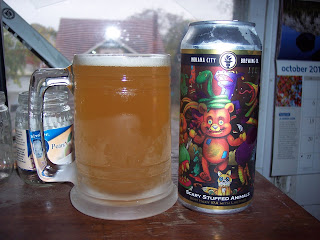 Posted by John Peddie at 3:02 PM No comments:

“This aromatic super-hybrid sticky IPA is first and foremost a phenomenally delicious and drinkable beer, with the added bonus of an olfactory experience that mimics that of the legendary G13 cannabis strain. The IPA base brew has a great body, good head and nice amount of haze at a pleasurable 6% ABV. To work with the malt bill, the brewers added some of their dankest hops, Columbus and Simcoe, plus two dry hop additions. To achieve the aroma, our brewers found the perfectly botanically-sourced, strain specific terpenes and married them with proprietary natural hemp flavor, both perfectly complementing the hops in the IPA.”

So, pot beer. I guess. Crisp and fruity up front, and then a slightly bitter finish with a hint of lemon. I don’t know what hemp is supposed to taste like, so that may be there and I just don’t know it. It doesn’t taste like pot—or at least it doesn’t taste like pot smells when you’re smoking it. I’m not sure that would be a good flavor for beer. The citrus is more pronounced on the second one, when the mug is slightly warmer. The finish is less bitter as it warms up, too. I like to read big, 1000-page novels sometimes for no other reason than that they are long and difficult; sometimes I like fiction to be challenging. I also like the flavors in beer to be complicated and challenging, and this one has a lot going on—some flavors are more prevalent when it’s really cold, and others stand out as the beer warms up. This is the most interesting beer I’ve tried in quite awhile. 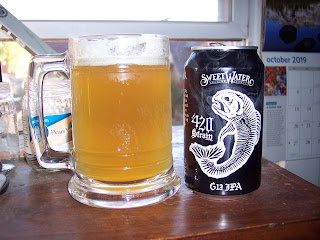 Posted by John Peddie at 5:36 PM No comments:

Tried this a couple of weeks ago while we were on our little trip to southern Indiana, and didn’t care for it much; but this time around is much better. That light sweetness is much more apparent up front now, and it pairs nicely with the tropical flavor. I remember it being much sharper before, but this one is very smooth. Not sure if that’s because I poured this one into the mug and drank the other one out of the can or not, but hey—I’m still learning. 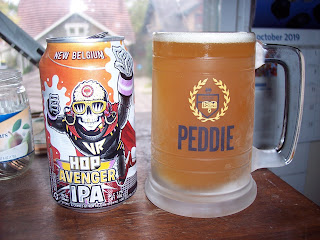 Posted by John Peddie at 2:47 PM No comments:

“An unfiltered IPA that’s bursting with ALL the hops, Liquid Truth Serum is brewed using a unique process that incorporates four different states of hops: whole leaf, liquefied, pelletized and powdered. The result is a blissfully inefficient IPA full of citrusy and tropical notes, that’s truthfully hoppy without being deceptively bitter…honest.”

Very tropical up front, with just a touch of dry on the back end. I’m hoping the citrus will come out as it warms up. After that initial tropical hit, I get a bit of strone fruit, but not citrus. This is going to sound strange, but here goes: this is a very good beer, but I’m not sure I like it. 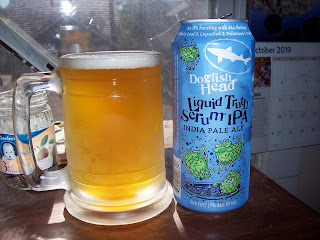 Posted by John Peddie at 2:51 PM No comments:

“This beer is all Citra hop aroma and flavor with very little bitterness. It’s sure to please fans of the style, make some new converts, and continue to anger those who don’t think hazy IPAs should be a ‘thing’.”

Can’t really argue with the description—it’s very hazy and very Citra-y—but it doesn’t do much for me. The tropical flavor does linger nicely, though. 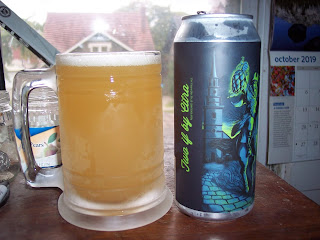 Posted by John Peddie at 1:43 PM No comments:

“Powerline—Warning: Sparks fly when you sip THBC Powerline New England-style IPA. An electrifying mix of Citra, Mosaic, and Calypso as late addition and dry hop. Shock your senses with pineapple, mango, and piney hop character. Hazed to perfection with flaked oats, and balanced with Golden Promise malt to amp-up the flavor.”

If I’m commenting more on the writing than on the beer, then I’ve jumped the shark, haven’t I? I like when people use the Oxford comma, though. It demonstrates an attention to detail that I value. Hyperbole? Not so much. But hey…maybe they just really like their beer. There is a nice combination of tropical and piney hop notes, and a strong bitter finish that provides an odd balance to the fruity hops. And I feel like it opens up a little bit when it gets warm, but I might be wrong. It’s 8.0%, and I’m near the end of my third, so I might be the wrong guy to ask. 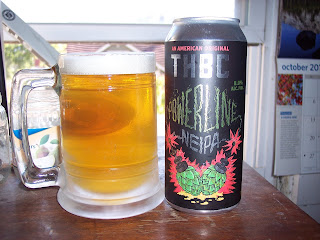 Posted by John Peddie at 8:09 PM No comments:

“Our India Pale Ale is assertively hopped with Cascade, Columbus and Centennial hops, creating a perfect balance with the pale malt character of this fine American IPA.”

It’s a little bit too malty for me, and I’m not really getting the hops; but it’s not bad. Tastes a little bit like metal straight out of the bottle, but it’s just fine once it’s poured into a glass. (Which sounds like damning with faint praise because it is.) 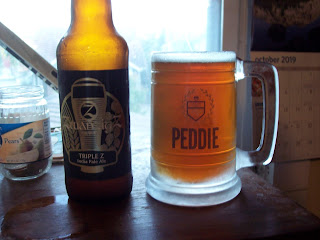 Posted by John Peddie at 7:13 PM No comments:

“TropiCannon, the unbound wanderer with a sense of adventure. A refreshingly fruity, citrusy twist on an American IPA. Its bold citrus flavor will set you adrift in a tropical paradise.”

Not a milkshake IPA, but it has the heavy, forward fruit flavor of one. It’s almost like drinking a glass of sparkling Sunny Delight, but it has enough of a bitter finish to disabuse you of that notion pretty quickly. It also sort of tastes like one of those sweet, fruity medicines you liked having to take as a kid because they tasted good. And if all of that sounds like an odd way to describe beer, well…I guess it’s because this is an odd beer. Not bad. Just different. 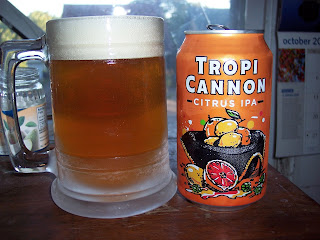 Posted by John Peddie at 6:58 PM No comments:

Strong stone fruit flavor up front, with a crisp, dry finish. I’m not sure the hyperbole in the description is warranted, but it is a fine beer. Maybe the best thing I’ve tried from Deschutes so far. 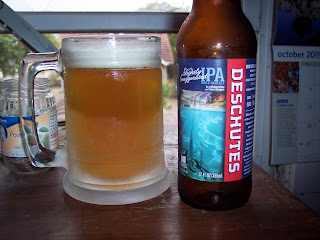 Posted by John Peddie at 4:21 PM No comments:

“Bursting with an overwhelming amounts of citrusy Amarillo hops, Cone Crusher showcases tropical fruit overtones of orange and mango, while being backed by a pleasing earthiness to make for a crushable beer.”

Well…okay. I’ll give the bad writing a pass, because this a very romantic beer. Those fruit flavors are soft and sweet up front, and I get maybe a little bit of grass, too. Or else I’m just grasping for the “earthiness” they describe. I don’t know what “crushable” means, but a quick Google search tells me that, as it pertains to beer, “crushable” means “easygoing, super-drinkable beer” that is “well-balanced…with low-to-medium alcohol…but tons of flavor that make you want to go back for more again and again.” At 8.6%, this is way too big for me to want to back again and again, but the first one is very fine. Still pretty sweet on the back end, and the alcohol lingers. Drink a couple of these with someone you love… 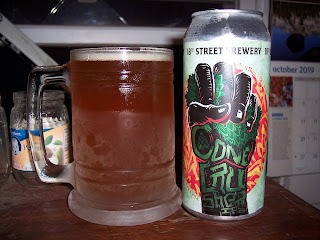 Posted by John Peddie at 8:41 PM No comments:

“Each year, we pick local hops fresh off the bine to brew in small batches within 24 hours of harvest. This season, to celebrate our love of local farmers, we’ve partnered with our friends at Growing Places Indy to support their efforts to grow community wellness through urban agriculture. So, kick back, sip, & join us in celebrating the fruits of nature with this juicy wet-hopped IPA made with Indiana-grown hops boasting fragrant notes of citrus & pine.”

Whew. That’s a mouthful. But now I’m starting to rethink what it means for a beer to be “juicy.” I usually associate that word with sweet-ish beers, moderate alcohol, and lactose—none of which are present here. Instead, we have a beer that is crisp and dry up front, and then expands with wave after wave of fruit flavor on the back end. I get lemon, peach, and melon, and that’s just on the first beer in a cold mug. The second one didn’t open up all that much, but I got a hint of pineapple. This one isn’t on their website yet, but I’m loving this Side Trail Series. 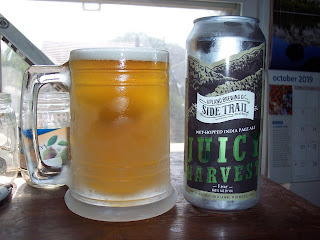 Posted by John Peddie at 2:52 PM No comments:

If you don’t get why McConnell is bad, then you’re not going to get why a classical guitar version of “Echoes” is fucking awesome. You lose.
Posted by John Peddie at 2:45 PM No comments: