“We crafted this unique and refresing IPA using four different varieties of hops to impart citrus zest, pine notes and a refreshing floral aroma. We then dry hop the beer after the boil to complement the subtle malt backbone creating a complex and balanced beer that isn’t overly bitter like most IPAs on the market today.”

Also, I get a vague hit of Dark Eyes cherry-flavored vodka on the nose—and that just screams college. The malt backbone isn’t especially subtle, but it isn’t overwhelming, either. Hopped up just enough to keep that malt from being too bitter—but not nearly as accomplished as they would have you believe in the blurb on the side of the can. 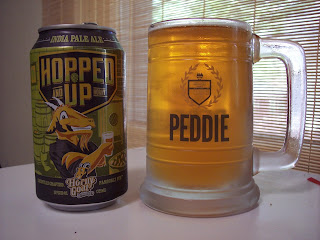