So I’ve been catching up on The Sopranos, which I never saw when it was on the air because we’ve never had HBO and of which I was a bit dismissive when it was on the air because it was in direct competition, as far as acclaim and awards go, with The West Wing, which was on plain old network television and which Amy and I both enjoyed to watch. Due to some faulty DVDs from the library, I’ve had to watch bits of the last few episodes of the fourth season more than once; and one of the bits I’ve seen a few times is Janice trying to get Bobby Bacala to eat his dead wife’s last dish of baked ziti.

Hearing “baked ziti” over and over again made me want to have a go at it myself - and I just happened to have checked out the Sopranos Family Cookbook from the library the other day (I know, I know - obsess much?), so I flipped through it, looking for the recipe for Karen Baccalieri’s baked ziti. Unfortunately, that’s not in the book; the only recipe for baked ziti is credited to Carmela. (And yes, I know these are all just characters and that someone else came up with all the recipes in the book. It’s the spirit of the thing, you know?)

So…working from the recipe for Carmela’s dish, I boiled up some ziti and tossed it with some tomato sauce (that Amy made sort of from scratch) and some grated Parmesan and Romano cheese. Then I turned half of the ziti out into a casserole dish and spread ricotta and shredded mozzarella over it and covered that half of it with more of the sauce. Then I plopped in four links of basil pesto chicken sausage that had cooked up in the pot of sauce and poured the remaining ziti over that, covered it with more sauce and more cheese, and threw it in the oven. The recipe said to bake it at 350 for 45 minutes covered and then 15-30 more minutes uncovered. I cut that time down by about a third, to 20 minutes covered and about 10 more uncovered. And this is what came out of the oven. 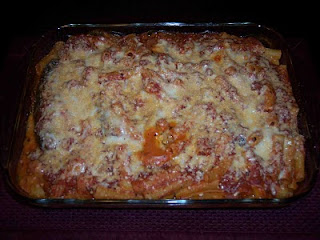 And this is what it looked like on the plate. 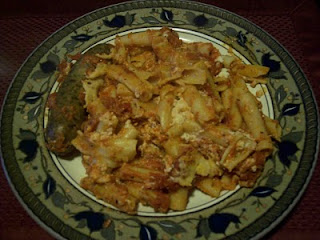 Unfortunately, I’m not a professional photographer; and those pictures looked way better in the camera’s display window than they do now on my computer, particularly the shots of the plated dish. Also unfortunately, it wasn’t as good as I had hoped it would be - although for something that was made pretty much on the fly, with not a whole lot of thought put into it, it turned out pretty well. The pasta wasn’t quite as toothy as I would have liked, and there wasn’t enough sauce; but both of those things can be fixed on the next go round.

Now…if anyone out there knows of an actual recipe for Karen Baccalieri’s ziti, I’m all ears.
Posted by John Peddie at 12:04 AM

I found a recipe that just might be the one. One Bobby Bacala would enjoy. Let me know if you want it!

Yeah, I'd love to have it. Can you shoot me the link, or post the recipe here as a comment? Thanks for reading!

In skillet, heat oil over medium heat.
Brown garlic lightly.
Stir in the tomatoes, parsley, basil and salt and pepper.
Pour in water and let it come to a boil.
Reduce heat to low and let it cook for two hours. (If you can wait that long. I can't)
Stir occationally to avoid sticking to bottom.

1. Bring large pot with water to boil. Add salt, pinch or two, and cook Ziti pasta Al Dente. About 8 minutes.
2. In large skillet brown onions and ground beef over medium heat. Add your spaghetti sauce and let it simmer for about 15 minutes.
3. Pre-heat over to 350 degrees Fahrenheit (180 C)
4. Butter a 9 x 13 inch baking dish and layer as follows:
1/2 of the Ziti, the Provolone cheese, the Sour cream and 1/2 of the Sauce mixture. Then:
The remaining Ziti, the Mozzarella cheese and the remaining Sauce mixture. Top with the grated Parmigiano-Reggiano.
5. Bake for 30 minutes or until cheese are melted.
6. Enjoy. Having seconds a day later is the best.

I found this recipe but really can't remember where. So Salute to whom ever created it!