“An exotic blend of hops provide a blast of flavor and break away aromas in a golden ale built for maximum momentum.”

Nice balance and strong hops, but more refreshing than aggressive. Feels to me like it might be a bit heavier than the 5.5% they advertise on the can. Approachable and uncomplicated, this is another one that would be good to talk about, if perhaps not quite as much as the One Night in Bangkok at Cannon Ball. 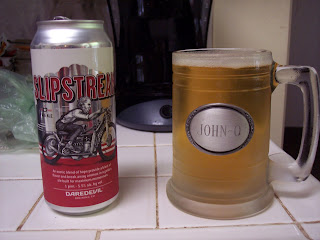 Posted by John Peddie at 7:24 PM No comments: Links to this post

6. Cannon Ball - One Night in Bangkok

NUVO posted a list of 10 Indiana beers you should drink this summer, and this was the one that caught my eye—not least because I knew that Erin Kem is the chef at Cannon Ball. Before that, she was the sous chef at R Bistro. If that name doesn’t ring a bell, it should. R Bistro was the first important local and independent restaurant in Indianapolis. Long before words like locavore and foodie were fashionable, Regina Mehallick was dishing up a new menu every week at the far end of Mass Ave. She ran that show for fifteen years before closing the restaurant in early 2016, but she had been easing herself away from the day-to-day grind of the business for some time before the restaurant closed. That’s a long way around saying that the chef at Cannon Ball today was previously, in all but name, the executive chef at what was arguably the greatest restaurant to ever open its doors in Indianapolis.

So after our last brewery get-together fell through, I suggested Cannon Ball for the next one. To my surprise, everyone agreed. I did a ride-by on my bike a few days beforehand, to see if it was workable; and since I found that it was, I arrived ahead of the group and wrote for a little bit while working on my first beer—the aforementioned One Night in Bangkok, which is a golden ale with Thai basil and ginger. It’s a light, easy-drinking ale with very subtle notes of Thai basil and ginger. Reminds me a little of how subtle the flavors are in the brews at Black Circle. If the words basil and ginger weren’t in the description, you might be hard pressed to guess that they were there. I missed the ginger in the first beer, (during which I might have been a bit off from a 20-minute bike ride in the heat and humidity) but picked it up on my second. Just a hair lighter than I prefer, but eminently drinkable and very fine for conversation. 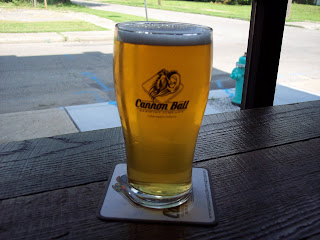 Oh…and did you want to know about the food? The only thing I tried, apart from a bite of the potato salad that came with Dione’s sandwich after she threw in the towel, were the deviled egg tacos, which I had been lusting after since I first looked the place up and read the menu. And I just want to stop you right there. You’re either in or you’re out. Nothing I can say is going to change your mind. You’ve got deviled egg, beets, and beet greens salsa verde all piled on—wait for it—a beet tortilla. You get a little sweet in the deviled egg and beets, and a little savory in the cumin and chile in the salsa verde, and just…you know…holy crap. You can’t even believe it until you taste it, because it takes everything you thought you understood about the concept of a taco, and subverts it. It even made me slip into second person for a minute there. 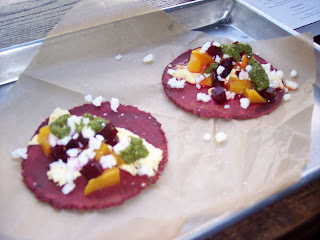 Posted by John Peddie at 1:20 AM No comments: Links to this post

Fake President Donald Trump is a piece of shit. Jeff Sessions does the right thing and recuses himself, and that’s unfair? Fuck you, Donald.
Posted by John Peddie at 11:47 PM No comments: Links to this post

The large amounts of rye malt are very evident in the dry, almost bitter, finish; but the strong citrus notes in the Falconer’s Flight hops bring it almost into balance. They probably want it to be a little bitter so you recognize that earthy spiciness. Or I just like to make fun. Who can say? I’m not really making fun—at least, not of the beer. Sometimes the descriptions get a little precious, though, don’t you think? My reading and research into beer has not yet yielded hints as to what makes rye malt so freaking delicious, but I hope one day to find out. The only con to this one is the high alcohol (7.2%). I don’t enjoy a hard buzz anymore, and that’s sort of what I’m feeling after drinking two of these. Then again, I haven’t eaten anything today, either, so. 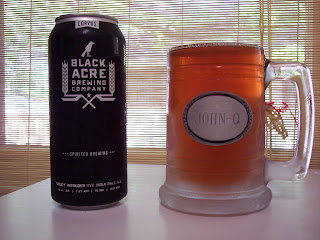 Posted by John Peddie at 5:39 PM No comments: Links to this post

It’s so warm up here in my aboveground lair that by the time I got to the end of this one, despite the fact that I had poured it into a frosted mug, it had warmed up to the point that the grapefruit notes from the Citra hops were quite prominent. So then I tried a cold one in the same now-warm mug to see if the grapefruit notes were there, and they were not. I detected more in the way of floral notes, and the beer, while possibly less complex, was more refreshing. Regardless of the temperature, it’s a little bit sharp for my tastes—but just a little. It’s possible that I am partial to Black Acre because they here in my 'hood, yo—but they are making some pretty good beer (and more of it now that they’ve moved the brewery into larger digs). 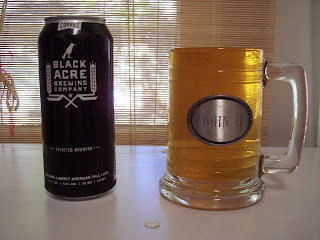 Posted by John Peddie at 7:09 PM No comments: Links to this post